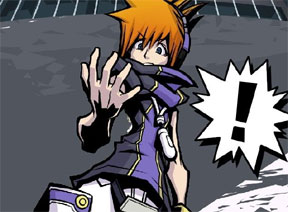 The World Ends With You

In my professional gaming opinion thru my current career I would have to say wholeheartedly that this game is Square Enix’s second best RPG release on the Nintendo DS to date! You should definitely give this RPG a try!

The game starts out with a solo character named Neku. He is somewhat bitter towards the world and very unsociable. He doesn’t really care. He wakes up in the Shibuya shopping district of Tokyo Japan out of what seems to be an unrecognizable sleep. He has no idea what is going on. He just simply wakes up in the middle of a mystery to which he has no real clue where to begin.

Yeah, I know. He’s just "clueless" (Snare drum and high-hat in the background). As I’m sure you would be too, he is just plain confused and a bit aggravated (Yeah, I know the word "clueless" would fit here" again! But I’m really trying to get past this already, so cut me some slack gamers!).

The control style is very easy. You can either control Neku with the stylus or with the D-Pad. The combat is stylus controls the touch screen.

To start the game off, Neku is awakened by a startling text message (Don’t you just love how video games incorporate modern lifestyle!). The message summons him in a riddle. These text messages guide you through the game by directing you to specific streets in the shopping district where Neku finds his missions If you do not complete the missions in their specific time, you are erased (that means you’re dead here.)

You are given a total of seven hours to complete the entire game. The hours are not literal in our terms though. Once you complete the first mission the hours will get a little bit longer as the missions become a little more difficult.

Your objective is to unlock areas of town by defeating enemies known as Noise. These enemies travel the unseen world around you and must be found by peering into this unseen realm. In order to do so Neku is gifted with a special magic pin that enables him to see them.

Pins are worn as different forms of magic for future combat. They have different abilities and outcomes. Some are passive while others are activated in combat. In your menu screen under PINS you can customize your pins by selecting three pins at a time to wear in combat. You can also create different pin decks for your own options.

There is one pin that you constantly wear. This special pin allows Neku to see into the unseen realm to find Noise to defeat. When you activate it, Neku will close his eyes as a dark blue cloud covers the touch screen. He will see red icons floating around that have different tribal-like symbols on them. When you touch one of these icons you be transported into battle.

The Noise are fantasy animals based on frogs, wolves, bears, and bats. To fight them you will have to swipe the touch screen with your stylus in a specific motion based on the pins you are wearing. For instance, one of the first pins you receive is a fire element. To activate it in battle you simply touch a spot on the touch screen and slide you stylus across the screen to create a trail of fire. This is very useful for attacking a foe multiple times, or a lot of enemies standing together.

Along the way you will meet your partner Skiki. Shiki is pretty much in the same situation as Neku. She does not wear pins though. Instead she has kitten that she sends out to slice up the Noise when in battle.

When Shiki comes along the battle system evolves greatly. Skiki takes the top screen during battle. The game will fight for Skiki until you learn her moves. To control Shiki you hit the D-Pad in the direction that she is facing an enemy. A short sequence will pop up that you have to hit with the D-Pad in order to execute a move. There are three sequences each ending with symbol on a card. The cards are ESP cards which you will later have to match up with three blank cards at the top of the screen. When you match them up Neku and Shiki will fuse their attacks together for devastating blows.

Once you get used to the combat options between the two characters you can mix up your style between them during battle.

The landscape is pretty expansive. There are always Noise around to eliminate so you can always gain experience. One of the best power ups that you find is a sticker that Shiki will wear that allows you to gain XP for your pins while the DS is turned off! However, the sticker only works for one week at a time so it’s best to pick the three pins that you want to build up the most and then turn the DS off for a day or so. Once you fill a pin all the way it will become Mastered.

You can also wear different clothes that work like armor in more traditional RPG’s to boost your stats. You can also eat fast foods that will boost your stats and skills as you "eat" them during battle. This means that as you fight your character will "digest" the foods until the game prompts you that your stats have gone up. And you thought fast food was bad for you?

These traits blend together for a unique RPG experience that is full of originality and uniqueness. Topped off with the indie pop music soundtrack in the background on the main screen, and I think you will find that The World Ends With You is an RPG in a class all it’s own. Square Enix has a real winner here and I think that a lot of RPG fans will be satisfied with the new experiences found in this game.

It earns 4.5 GiN Gems for being a unique take on a familiar genre.