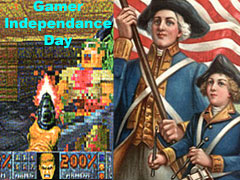 Apparently, I have not written a Forth of July editorial since 2003. So with apologies to all our non US-based readers who probably have to work on Friday, I thought it would be nice to mention all the great ways we can spend our long weekend. Chella tells me about some bank holiday or other that they are celebrating almost every month in Europe anyway, so it's about time we had a little vacation here in the US anyway. Come on, we are due here! I even pulled up the graphic from that aforementioned 2003 editorial because A) I thought it would be cool to use it again and B) really, I didn't want to spend time making a new one when I could actually be gaming and not writing about gaming, since there is a huge difference.

And the truth is, things in the US are in kind of bad shape right now. The economy is about as sluggish as I have ever seen it. Gas prices are through the roof. The cost of food is way up. We are fighting a war without any end or even a realistic goal in sight. Dogs and cats are living together. It's mass hysteria! We need a break. And being able to take our minds off the pressures of the real world and devote our time to something a little more cut and dry like fighting hoards of zombies, building a city of our dreams or commanding a battle fleet of spaceships will not be unwelcome.

The most obvious way (or at least the easiest) to spend a three day weekend would be with the MMO of your choice. Currently most of the GiN gang are pretending to be hobbits with the excellent Lord of the Rings Online game. That game was voted by over 100,000 of you readers as the PC game of the year (not that Turbine bothered to use the cool logo we gave them or even announce their victory in the contest) and has held my attention through 45 levels of play so far, with Circee the little hobbit guardian approaching the current level 50 cap like a missile.

MMOs in general are a nearly perfect way to lose an afternoon or a day or a weekend of free time, and LOTRO seems better than most in this aspect. I have often decided to log in for "just a few minutes" which quickly turned into "just a few more minutes" hours later.

Another great gamer pastime is going back and solving some/all of those games that you have had lying around for months or even years. You all have one. Some game where you played until you got up to that really difficult boss/level/mission/puzzle that you never could quite get past. Perhaps you just stopped playing because something else came along and you never got back to the old game.

Three day weekends are perfect for booting up that old copy of Tomb Raider or Hitman or Oblivion or Grand Theft Auto San Andreas and actually making a second or third effort at solving it.

The albatross around my neck on this front is a game that I was writing about last time I did a July 4th editorial, which if you have been paying attention, was 2003. The game: Ring of Red. Not only is this game one of the first games I ever got for my PS2 (a launch title for the platform I think) but it's also one of the only games I ever started and never finished. I spent over 800 hours solving Morrowind and about 500 doing everything possible in Oblivion, so I can be a dedicated gamer when I choose. But Ring of Red always beat me.

The biggest problem with RoR is the archaic save system that only lets you permanently save at the end of each level. The game erases your save when you load it, so if you die after say, five frikin' hours of combat, you have to play the current level all over again. Of course I found a way around this by copying the temporary save to a different memory chip, but this I discovered five years ago. So I don't really have any excuse not to keep playing. Perhaps this will be the year I finally finish the thing. Hope I remember how to fire up my mechs.

And of course there is the more traditional way to spend a long weekend gaming: get a new game. I don't know how many people wrote in to tell me that they got the $10 off coupon to buy Grand Theft Auto 4. There must have been a million of those mailed out. So there will be a lot of virtual carjacking over the weekend I would guess.

Let's just hope that no more kids decide to go on a crime spree after being inspired by the game, which happened recently in the news. [Begin sidebar-rant.] First off, where are the parents while their kids are formulating a plan to beat and rob people GTA-style? I'm sorry but the argument that these were good kids before they played GTA4 does not hold water with me. Even if it did, shouldn't the parents have stopped them from playing? Secondly, those kids were thankfully caught within five minutes of blocking a major road to jack and rob people because motorists called police on their cell phones, who responded and rounded the wannabe gang up. (The mark of a great criminal is a brilliant plan, which these dolts apparently did not work out beforehand.) If they were so into Grand Theft Auto, why didn't they just run into a Pay n' Spray when their warrant level rose too high? Oh yea, because there's a difference between a game and reality! You can't blame one on the other. [Okay, rant over.]

So there you have it, several great choices for playing games this weekend. You could play an MMO, solve an old game -you know you have one lying around-or get something brand new to go with those hot dogs and hamburgers. Whatever you choose, everyone at GiN wishes you a safe and happy time at it. The break could not have come at a better time, so don't waste it!