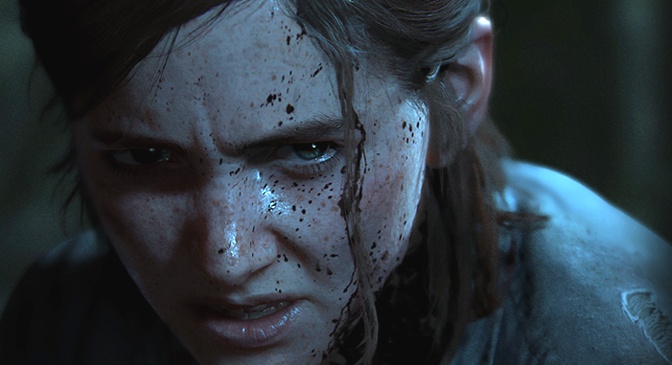 The Last of Us Part II

My review of The Last of Us Part II is a little delayed because my PlayStation 4 got struck by a surge from lightning, so it was at the Sony repair shop when the game was released. I’m very impressed with the Sony repair program, and wrote about my experience in an editorial. But it meant that I had to wait to play this game, one that I was really looking forward to for a very long time having twice gone through the original title on the PlayStation 3 back in 2013, and then once again with the remastered version on the PlayStation 4. With all that said, The Last of Us Part II was more than worth the wait.

I realize that reviewing this one late frees me up a little bit in terms of spoilers, but I am going to try and make this review as spoiler free as possible anyway. If you have not heard about any of the twists and turns with The Last of Us Part II, do yourself a favor and try to play the game without learning about them beforehand. I somehow was able to do that, and feel that my experience was much more emotionally intense for it.

The game takes place several years after the events of the first game. Joel and Ellie are living at the town of Jackson, near that dam in Colorado from the first game, and it’s clear that the gameplay will be centered on Ellie this time around. She seems to have a fairly normal life as post-apocalyptic societies go. She’s got her own place, which is a pretty cool converted garage with her own bathroom, kitchen, and combined bedroom and living area. It kind of reminded me of my first apartment after college. And of course, because of the dam, she has power too. So life is pretty good. 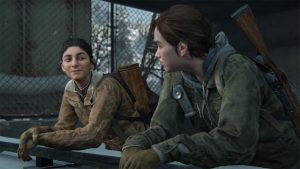 It’s also clear that she is embroiled in the normal, everyday life of a young person who is not quite an adult, but is certainly no longer a kid. She expresses her feelings of awkwardness in her journal, which will be with you and added to throughout the game. It’s also clear that she is gay as she writes about girls and life in the settlement, and one in particular named Dina who will be a central character in the game. The fact that she is gay is a big part of the game, and also not important at all. Developer Naughty Dog did a wonderful job of simply making it a part of who she is, which enhances the story. There are some romantic scenes, and one part where she experiences a prejudicial person, but the fact that she is gay isn’t tossed around a lot. It’s a part of the story which makes it all the more realistic.

[amazon text=Pick up a copy of the amazing The Last of Us Part II from Amazon!&asin=B07DJRFSDF]

At first, you will be performing normal duties in the area around the town, mostly patrolling for infected, looking for supplies and the other things that societies trying to survive in a world filled with zombies must do to get by. It’s winter, and the snow adds both a beautiful and sometimes scary element to those challenges, like when finding a deer tore up by the infected with its crimson blood splattered dramatically across the new fallen snow, and knowing that you will soon have to face them. 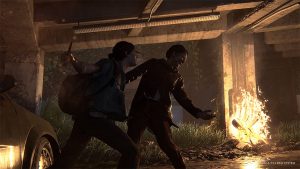 This relatively blissful period does not last long. There is an event that happens (no spoilers here) which motivates Ellie to embark on a cross-country quest for revenge, which takes up the bulk of the gameplay. Ellie travels with her brand new girlfriend Dina, trying to reach Seattle to settle a score with the Washington Liberation Front, a paramilitary army who are also known as the Wolves. Ellie has a specific kill list, but these guys are such bungholes that taking them down is always a real joy whether or not they are specifically a target. They make up the bulk of the human enemies in the game. They are organized, well-equipped, militant and very numerous.

There are also infected of course, though they kind of take a backseat to the Wolves as enemies. There are even times when you can use the infected against the Wolves. In one scene, I was dropped into a terrible position in an underground subway. I was undetected, but the Wolves were slowly closing in using their solid military tactics. I had nowhere to run and knew I would be discovered before long. There was also a huge group of clickers, those really powerful but blind zombies, nearby in another room, cutting off any escape in that direction.

Figuring my time was almost up, I did a Hail Mary play, tossing a glass bottle out of my dark hiding place into the open, making a hell of a lot of noise in the underground subway station as it shattered. Sure enough, the clickers came limp-running along to see what was up, and the stupid Wolves started shooting at them, which brought many more out of the dark. It was a bloody massacre that lasted for over a minute, and quite graphic as I listened to Wolves screaming for help and getting torn to pieces. In the middle of that chaos, I slipped around the peripheral of the battle and made my escape. That will forever be a memorable gameplay experience in my mind. 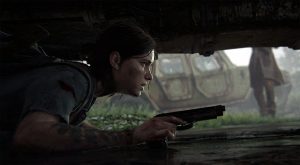 Combat in Part II is much the same as in the original, with many of the same weapons. There is an increased stealth element now, with both tall and short grass to hide in. And besides just kneeling, you also can go fully prone and crawl, which keeps you hidden in short grass and also lets you slip under things like broken down cars or collapsed buildings. Infected will generally ignore you hiding under a vehicle, but the Wolves will occasionally peek down and see you, especially if they are already suspicious or on alert. You can shoot from a prone position though, even impressively with your bow, which helps to even the odds. Many times I would blast a lone Wolf in the knee from under something, which caused them to fall over so I could finish up with a headshot. 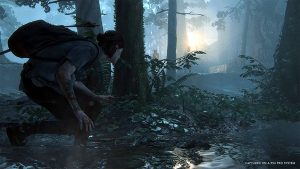 The game’s pacing is perfect. There are sometimes long stretches where you can explore very open maps, discovering secrets and resources hidden for years following the collapse, or even clues about who lived there before and what became of them. And then there are sheer moments of terror when you round a corner and run straight into a Wolf patrol, or a hidden group of infected who suddenly reanimate and come at you. There are also levels which mostly center around combat, or sneaking around trying to avoid it, but it’s never too much that the game becomes some sort of mindless shooter. I was never either bored or overly taxed by the gameplay. Like I say, the pacing seems perfect.

There are also a few other new elements, like a more complex, multi-subject skill tree. You still improve skills, as before, by collecting supplements. There is an upgrade path now for stealth, a crafting one, a combat precision tree and a survival path. At higher difficulties, you wont find enough medicine to improve them all, so choose wisely. 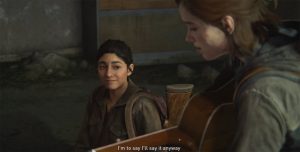 You can also play the guitar now, which is done by strumming the PS4 controller’s touchpad while pointing at different note groups. Ellie will sometimes play songs throughout the game in a cut scene when she runs across a guitar, but players can take over afterwards, strumming away and having fun. There are gamers on YouTube playing entire songs using the guitar interface for Part II. I was nowhere near that good, but got to where I could string together a few notes in a pleasing way.

I mentioned the story of The Last of Us Part II in the beginning of this review, but it’s worth going over it again. Much of the backstory is told through interactive flashbacks, where Ellie and Joel share some touching moments that took place during the time between the two games. This was a really nice touch, and I didn’t want them to end. It’s weird to say it, but the story is really the focal point of the game I think. Yes, there is a really intense and enjoyable stealth combat interface, which is a lot of fun. But your motivation for being there on your murderous mission is driven by the amazing story, so it’s a really good thing that it’s told so well. 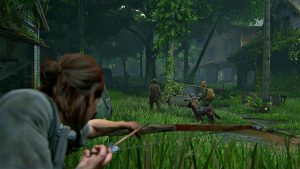 I honestly don’t know if I like the story or the combat better, and I can’t say that about many other games.

As the PlayStation 4 era comes to a close, and we start to look forward to whatever goodies the PlayStation 5 can bring us, it’s good to have one last hit to cap what has been an amazing console generation. The Last of Us Part II is a masterpiece, and although it’s arriving late in the PS4 life cycle, it will surely take its place on the list of greatest games of the current generation.