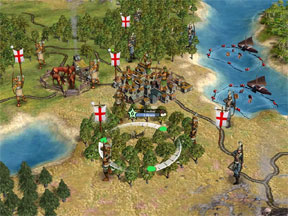 No, this is not the ancient Atari game where up to four players could play breakout against each other. This is the expansion to the latest in the Civilization series, the best turn-based strategy game dynasty of all time. I can see where you might have gotten confused though.

Civilization IV: Warlords is an expansion (i.e. not a stand-alone game) to the ever-popular Civilization IV strategy game. It manages to add a great deal to the game without managing to detract from any of the main game’s virtues.

The expansion provides 10 new leaders, six of which lead brand new (to Civ IV -you may recognize them from expansions to Civ III) civilizations: Carthage, Celtics, Korean, Ottoman, Viking, and Zulu. The other four are additional leader choices for existing civilizations: Egypt, England, Russia, and Rome.

In order to accommodate all of these new leaders and keep them distinct, C4W has added three new traits, and re-traited about half of the existing leaders. A Charismatic leader gets +1 happiness per city, additional +1’s from monuments and broadcast towers, and units need 25 percent less experience for unit promotions. An Imperialistic leader produces settlers 50 percent faster, and produce a Great General (I’ll get to him shortly) 100 percent more often. A Protective leader’s archery and gunpowder unites receive Drill I and City Garrison I promotions for free, and can build walls and castles twice as fast.

In addition to their unique unit type, each civilization also gets a unique building in Warlords. This building replaces a particular building that is available to everyone, and does everything that that general building does, with extra bonuses. They may provide extra culture, science, happiness, health, or wealth, or give free specialists, or cost fewer hammers to build, depending upon the specific building.

Warlords also adds two new military units and one building to your production options. The Trebuchet has less strength than a catapult (4 as compared to a 6), but it gets +100% when attacking cities, and does slightly better city bombardment. The Trireme can only stick to the coast like galleys, but has zero cargo space and gets +50 percent strength vs. galleys. The stable gives two experience to mounted units above and beyond what a barracks gives.

There are also three new wonders that have been added by C4W. The Great Wall actually shows a wall along the contiguous cultural borders surrounding your civilization at the time you built it, and no barbarians can cross that wall. The Temple of Artemis doubles the trade route yield in the city where you build it. The University of Sankore causes each building associated with your state religion to provide an additional 2 research points.

A new great leader, the Great General rears its head in C4W. He isn’t like the other great leaders in two major ways. One, while all of the others’ appearances are determined by each city’s great person point accumulation, the Great General waits for a certain amount of experience to be earned by any of your units before arising. This total increases with every new General. Second, a Great General can never contribute to starting a golden age. You can spend your General to become a military leader (giving each unit produced in that city 2 free experience points), or start a military academy (+25 percent bonus to military unit production).

But the third thing you can do with him is probably the thing you will do the most often: turn him into a Warlord. A Warlord attaches himself to a single unit, making available special promotions to that unit. In addition, he gives a one-time gift of 20 experience points that is divided amongst all of the units in the stack he is in when he turns into a Warlord. Also, the unit he is attached to can upgrade for free when the next tech advance makes it possible. But of course if that unit is destroyed, the Warlord dies with it.

This expansion also provides a new diplomatic option: Vassal States. Once you have discovered Feudalism, you can acquire a Vassal state one of two ways. If you are a lot more powerful than another civilization and they like you a fair amount, you may be able to ask for them to become your vassal from the diplomacy screen. After ten years, the vassal then gets to decide whether to keep the relationship or break off peacefully. The other method is to select Capitulation as part of a peace treaty, but for most civs you have to beat them down severely before they will give you that option. In this case, a vassal can’t break free until their land area and population are both 50 percent or more of the master’s, or their land area drops to 50 percent or less than it was when the capitulation occurred.

Other than a few other tweaks, the rest of the game is still Civilization IV, and has kept all of its beautiful graphics and sound, great movies and animations, and overall look and feel. It quite easily earns its four and a half GiN Gems.