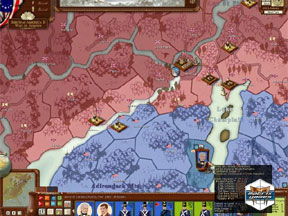 Birth of America 2:
Wars in America

A turn-based strategy game set in the American Revolution, Wars in America provides hours of fun, both against a computer and against friends.

Obviously, playing against another person completely changes the environment, adding that level of unpredictability no computer can really match.

But matches against the game were satisfying, with several different difficulty levels, ranging from tutorial to fairly difficult. In the many, many, many hours of time I devoted to dominating the game (I really like strategy games, so take this with a grain of salt), I never once came across a battle that was undefeatable.

With the ability to play either the Americans or British, players gain a different perspective on battles they might have played before. And of course, as with any strategy game, the replay value is quite high, considering every move you make, causes the computer to respond differently.

The ability to save a game, or simply leave it "paused" before ending a turn makes it nice to play when you should be doing something else (like working), or if you can only fit an hour a day in to play.

A counter-based game similar to the Total War games, Wars in America, unfortunately does not offer the ability to command troops one battle at a time. Rather, the game is something like a localized Risk game. Players have the ability to create armies, staff garrisons, lay siege to towns, or command naval assaults and blockades.

Unlike some of the Risk games though, Wars in America takes into account terrain features, from open plains to dense forest, making troop movement something more than simply drag and drop.

If you’re at all familiar with the battles fought then, you’ll recognize many of the battles fought during the campaigns in the game, or if you’re thinking of buying the game for kids, it’s not a bad way to get interested in history. Being set during the American Revolution, the title is literally dripping with history. And there are a lot of features that really push the realism angle as well, at least as it pertains to military strategy.

In addition to just the regular American or British forces, there are also Indians, minutemen, privateers, naval transport, and German mercenaries. And there are rules in place for certain strategies that were very big and effective at the time, like naval blockades.

Of course historical battles are also represented here, including Fallen Timbers (1791-1794), Great Lakes (1813) and New Orleans (1815). As a bonus, you get the full campaigns for the French and Indian War, the American Revolution and the War of 1812. This is a real boon for history buffs and also for younger players who see the battles as nothing more than pages in a text book. Here they can come alive. And some of the strategic and difficult decisions that were made will become apparent.

The graphics are somewhat simplistic, but not bad overall. To be honest, they rather reminded me of something you would see on a Super Nintendo. I have to admit, I did not play the game with sound beyond the very opening sequences, but the music I did hear wasn’t terrible. Just repetitive, as with most strategy games.

The interface was a bit cluttered, with quite a few features that are somewhat difficult to remember for the beginner player. However, all of the necessary tools were easy to get to, making it possible for even a novice to start playing. Using the entire interface takes some time to get used to, with not all of the tools being intuitive, but it gives a player something to grow into.

Overall, Birth of America 2 was a lot of fun, and one I plan on hanging on to, to replay when I’ve got some time to kill.