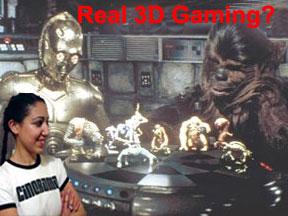 You may remember, last year I threw some mockery the way of 3D gaming. However, a few months on and it looks like I may have to eat my words as I seem to be getting a trickle of press releases and news pieces concerning 3D gaming. The games industry appears to be taking the whole third dimension a heck of a lot more seriously than I have been. So maybe 2009 will be the year that gaming enters the 3D space.

Now, let's face it, 3D gaming is kind of like flying cars. We all want flying cars, we all know that's the sure sign that we're living in the future, but where are they people? I'm living in the 21st century and all cars remain very firmly on the ground. The same can be said of 3D gaming. We all want it, but cardboard glasses aren't going to win us over. Gamers are gadget whores and will not wear something that looks like it's part of a primary school science project.

Apparently, while we've all been laughing and mocking – okay so maybe that was just me – big names like Sony have been hard at work. At this year's CES, Sony's keynote speech made it clear that 3D was a very real target for the company. When Sony starts talking 3D it's time to stop sniggering about Jaws 3D – we know it didn't work, get over it, move on people.

Sony CEO Sir Howard Stringer displayed an image from Gran Turismo 5, in stereoscopic 3D. Could this be why the game has been so long coming? Well, probably not. 3D glasses were still necessary to see the GT5 footage, but show reports were impressed with the results. However, before you start whooping with delight and welcoming yourselves to the future, it wasn't game footage and was purely for display.

Sony was also a bit cagey when it came to the technology. All this considered, we could be in for a long wait on the ultimate driving experience, but if it's robots you want, look no further.

Just this week, I received a press release announcing the release of ‘the first ever 3D console game'. Data Design Interactive is releasing Battle Rage: The Robot Wars on the Nintendo Wii, complete with stereoscopic glasses. Yes, it's true, 3D gaming is here.

According to Data Design's big cheese, Stewart Green, 3D gaming, "will really enhance the player's experience," adding, "players are now part of the game world, rather than sat outside watching the screen."

Battle Rage: The Robot Wars, does what it says on the tin, in terms of gameplay as you control giant robots fighting in different arenas. The preview footage shows a fairly average game, but perhaps the 3D aspect will give it that extra edge. Without my 3D specs it all just looked a bit blurry – one of the major problems with marketing 3D.

I'm sorry if I don't sound convinced, I want to be convinced, but something's holding me back. It's the glasses. Luke didn't have to wear glasses when he let the wookie win, so why should we. No, the secret to 3D gaming's got to be in the monitor and some of the major manufacturers think they could be onto something.

Nvidia has also jumped on the 3D gaming bandwagon with its complete kit designed to help you step into that vital third dimension. It does of course feature glasses. For a cool $199 you can convert standard games into an eye-popping experience. So as you can see, it doesn't come cheap, all this immersive, reach out and touch gaming.

For now, at least, I'm withholding judgement. Don't get me wrong, 3D gaming would be awesome, but much like the flying car, it seems to be just out of our reach. Sure we can have great 3D experiences, but affordable and in the home? Maybe not just yet.

To prove me wrong, please send all your 3D gaming goodies my way"