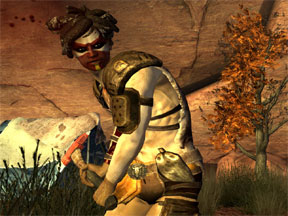 The second downloaded content pack (DLC) for Fallout New Vegas is out, and it’s a big success. Like most DLCs, and especially ones for Bethesda games, they seem to get better as they go along, and this is no exception. But the cool thing is that Honest Hearts is really completely different from the Sierra Madre DLC. So if you have been following along, you will be treated to a lot of variety.

In the Sierra Madre DLC, you were stuck inside a lot of tight corridors, in the abandoned town or inside the casino itself, hemmed in by concrete walls or poisonous red fog. In Honest Hearts, you hike out to the Zion National Forest, where there is an open world, plenty of clean water rivers and lots of beautiful greenery. It all starts the same way though, with a radio signal. This time the signal is asking for caravan guards to head up north into the new zone.

Honest Hearts tries to limit what characters can take with them into the forest, and you have to travel alone, so your regular companions will have to stay behind. I don’t see why my eye-bot could not have made the journey with me, but anyway, you have to go alone, or more accurately, with a caravan group that is heading out that way. But unlike the Sierra Madre, you are not stripped of all your weapons. Instead, you are told that you can only carry 75 pounds of gear with you because of the tight corridors and thin air. You can up that limit to 100 pounds by convincing or intimidating one of your new caravan buddies to drag some of your stuff. This was nice because it lets you choose what you want to bring along. Given that I use light armor, this was not much of a problem for me. With the Sierra Madre light security armor, my All-American rifle in hand, the Dinner Bell shotgun on my back and my Mysterious Man .44 magnum strapped to my hip, I felt pretty safe and had a few pounds to spare. A new perk will make your light armor more effective overall too, so be sure to look for it when you level after installing the new DLC.

Things happen pretty quickly once you get to the new area, and you will find yourself alone in the wasteland, though the forest can hardly be called that. In fact, the park looks pretty much like a national park looks like today, with beautiful mountains, clean water in streams and rivers, lots of trees and even signs telling you how to get to hiking trails, lodges and fishing holes. It’s obvious that this area was mostly spared by the nuclear war. Sure there are radiated insects and stuff like that, but no real environmental hazards. You can leave your radiation suits at home.

The park is limited in scope of course, but is a fairly big area. It’s probably five times as big as the Sierra Madre, or at least seems that way. And there are lots of caves to explore, and a handful of buildings and ranger stations, though for the most part, you will be adventuring out of doors.

Eventually you will learn that people who resemble American Indians live in Zion, but who are really just normal folks who have reverted back to a tribal lifestyle after generations in the forest. There are three main tribes, with the White Legs being the chief bad guys for this zone. The other two are called the Dead Horses and the Sorrows. Although the two good tribes get along, their leaders are always disagreeing over the right course of action. And neither leader is a tribal. The Dead Horses are led by Daniel, a New Canaanite, which is basically a Mormon. He’s a nice guy who follows a pacifist doctrine when he can. The Sorrows are lead by none other than The Burning Man. Yes, he’s Caesar’s ex-number two, who was burned alive and thrust into the Grand Canyon. You get to learn his real name and a lot of his history, and the history of Caesar too, which is really cool. He of course takes a more aggressive path in dealing with the invading tribe, and seems to be wrestling with his own personal demons. Eventually you will need to decide which path the good tribes should follow, with advantages and consequences for them either way.

The main quests are actually kind of short and can be accomplished in a few hours. Thankfully, there are plenty of side quests and general exploration to be done, including some undocumented quests where you learn the history of the valley. Notable and cool landmarks include a crashed bomber, a deserted hunting lodge (the natives are afraid to go into "the places from before" so most of these remain untouched), a camp from some Vault 22 dwellers who tried to come into the valley long ago and several ranger stations positioned around the park.

To help you on your journey, you will meet two companions. Be careful when you meet the first one because he looks like a tribal (he is, but a good one) and you may shoot him before you realize he’s an ally. I was not real wild about the companion perks, especially your first companion, but they were good to have along in a fight. Eventually you will get The Burning Man to fight with you, though you have to wait till the end game for this to happen. And yes, he totally kicks butt, as he well should.

Combat is difficult, but nowhere near the difficulty found in the Sierra Madre. Your primary opponent will be White Legs Indians. They are tough, but you can head shot and snipe them, and they stay dead once they go down. Most of them are only really dangerous at close range, though a few carry sniper rifles. A new perk called Sneering Imperialist will give you a big damage boost against tribals, which is not only helpful in Zion, but applies to raiders and other wasteland scum once you head home.

Your other opponents will be wildlife, especially yao guai bears (Yogi, get it, I never tire of that joke) and the giant versions of them. You can even get a trophy for killing ten of them in Zion. For them, I found shotguns to be highly effective. If you are lucky enough to have earned the 12-guage Dinner Bell from The Thorn quests, be sure to bring it along. It can one shot kill all but the biggest bears at close range.

In terms of loot, Honest Hearts seems a little light, though it does make up for some notable shortcomings in the core game. It introduces a .45 caliber pistol for one, which is so much better than the 9mm junk you are used to carrying. And .45 ammo will start appearing in the wasteland once you complete this DLC too. You can also find a single suit of really great medium armor if you follow one of the undocumented quests to completion. It’s a version of the famous Desert Ranger Armor.

Finally, and this can’t be overstated for me, I found a hat that provides both an armor bonus and a perception perk. The Park Ranger Hat, I believe, is the only hat to do this. You see, I use the four eyes trait, so I need to wear some form of glasses to get +2 perception, one from the glasses and one from the trait. Otherwise, it’s -1. Hats also almost always provide +1 perception, so my total bonus is an amazing +3 with glasses and a hat. That means that full face helmets are out, because I have to take the glasses off, which results in a -1 perception and no bonus from the helmet, since headgear with damage reduction don’t have a perception bonus. Now, the Park Ranger hat gives both. You get the +1 perception and one point of armor, and keep the glasses on. Plus, it gives a +5 bonus to survival skill, one of the very few items in the entire game to do so. And it looks darn cool with Authority Glasses. You can find several in Zion, with one at each Ranger Station, so gather a bunch for your whole gang back home.

It’s worth noting that at the end of the adventure, when you have finished the main quest, you are given a trunk containing most of the good stuff within the DLC including The Burning Man’s SWAT armor (not as good as the Sierra Madre light armor but with a critical hit bonus) and a unique pistol. A very powerful 12.7mm rifle can also be found, but it’s stashed in an out of the way spot. Here’s a hint: Skyward Rosa Portal.

In terms of negatives, there are some minor problems with the way creatures spawn in Zion. They literally fall from the sky, which is highly annoying. You will be on a bridge and everything looks clear in your scope, with nothing bad on the pipboy radar. Then all of a sudden a bunch of bears come out of now where. I watched for them literally fall from the sky as they spawned. In some spots like outside the general store and park ranger barracks, geckos and even crazors spawn practically right on top of you if you spend the night inside the building and venture outside the next morning. Once you know where the spawn points are you can be careful, or fast travel away in the few seconds before this happens, but it’s still annoying and really hurts the suspension of disbelief when playing. Thankfully, these are very minor problems. Overall, Zion seemed more stable than the core game, perhaps because of the all the patches for the PS3 that have come out since launch.

Honest Hearts is a refreshing change of pace for the Fallout New Vegas world. It was nice to swim in clean water surrounded by trees, and to be able to hunt beasts like you are on some sort of safari vacation. Of course you also get the new perks and the ability to raise five more levels above the cap, which is always nice. And the storyline is good too, not just the main one but also what you will find in the many side quests within the park. I would say that Honest Hearts is better than the Sierra Madre for sure, and if the DLCs keep getting better, who knows what the future will bring. You may even get to finally confront that other courier who has been dogging you the whole game. I’m sure we will get to fight him eventually, because we all know that war, never changes.