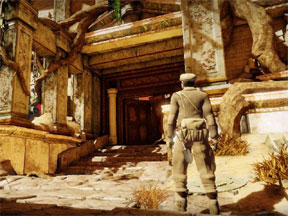 Adam’s Venture? Yeah I know what you’re thinking, "That’s some cheesy wordplay" and you would be right, luckily though I’m a sucker for puns and wordplay.

Sure it’s a sense of humor that you probably haven’t seen since some early 90’s cartoons, but let’s be honest those were simpler times. That being said I should tell you right now that Adam’s Venture 2 is filled to the brim with cheesy Saturday morning cartoon humor, so if that isn’t your thing then you won’t be interested. But for everyone else let’s get this review rolling!

So I’ve never played the first Adam’s Venture game and as such I was a little confused by what was going on in this one, something about ruins and a guy that betrayed his friends, you know the basics. As I played though I realized that I could still enjoy the title just for the story presented in it. As you might have guessed we are in control of Adam Venture as he tries to uncover secrets of ancient ruins while outrunning the bad guys.

At this point I started to reminisce about the Indiana Jones movies (not the fourth one) and for good reason. Adam’s Venture 2 (and I assume the first) are completely based off of Indiana Jones, and while nothing can ever perfectly capture that adventure feel that the first three films gave us, Adam’s Venture 2 does a relatively good job.

The gameplay of Adam’s Venture 2 is that of a puzzle game and a platformer put together. You’ll be treated to various different types of puzzles all while traversing the world. The puzzles offered in the game aren’t exactly the hardest there are, but then I have to remind myself that this game has a Pegi 7 rating. One thing that does bother me about the puzzles though is the repetitiveness of them. While each puzzle is fun, I can’t help but be bored when the game is filled with 4 other puzzles exactly like the one I just did.

The platforming aspect of the game isn’t bad. Run, jump, grab a ledge, it’s everything I’ve come to expect. The controls aren’t clunky and flows just right, well almost everything. There was one item in the game that gave me more trouble than any of the puzzles. There are boxes laying around that you can push and pull around the levels. These are meant to get you to higher up ledges and stuff like that, problem is that they are so dang hard to get on. The boxes must have been perfectly measured so that you could only get on them at the peak of your jump, but even then I stood around trying to jump on these dang boxes for two or three minutes at a time. Maybe I didn’t understand something but I do know that it caused me a lot of unnecessary frustration. So that alone caused me to dock a few points off of the gameplay.

Graphics in Adam’s Venture 2 are surprisingly beautiful. As in "Holy cow I thought that all family based games had to have horrible graphics." Actually almost everything in Adam’s Venture 2 is better than the norm for a family game, but let’s stick to graphics for the moment. So as I said the game is beautiful, characters have a good amount of detail to them and the environments are absolutely amazing to look at. Kudos goes out to Vertigo for putting in the extra effort that most developers overlook.

Now we get to the part of the review where I have to dock some more points, the audio. The voice acting in Adam’s Venture isn’t all that great. Remember how I mentioned humor from Saturday morning cartoons earlier? Well the voice sadly follows suit to that. Characters just don’t feel real when they’re talking. It’s obvious that it’s just somebody there to make a paycheck rather than to breathe life into a character. This is especially obvious with Adam; he talks so fast you would think he’s trying out for a part in the 1960’s Speed Racer cartoon. It came off as more annoying than anything else.

The rest of the audio of the game isn’t bad though, and the sounds effects are of good quality and the music always fits the mood.

Most of the games I give medicore or average review scores to usually can’t be fixed no matter what is done to them. Adam’s Venture 2 on the other hand has the potential and is still a good game as well. I’d go as far as to say that if reviewing this game and only taking into account other family games I could give it a 4 out of 5, but there are other games out there to take into account.

That being said Adam’s Venture Episode 2: Solomon’s Secret earns itself a respectable 3.5 GiN Gems out of 5. And if you are looking for a family title that you can feel safe giving to your kids, then this is just about perfect.