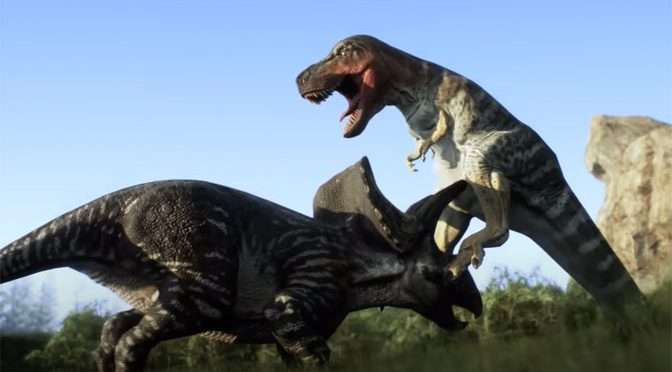 Path of Titans is a MMO survival game where you can act out your fantasy of living as a dinosaur. There are over two dozen dinosaur character options to choose from between carnivores and herbivores. On the carnivore side, you can play as the popular tyrannosaurus rex, allosaurus, or spinosaurus. If you prefer to be more of a gentle giant, you can play as the popular iguanodon, stegosaurus, or triceratops. Each dinosaur can be highly customized between different skins, patterns, and colors. You can also choose between three styles, each with a slightly different look and stat buff/debuff.

Each dinosaur starts out life as a hatchling and must progress through a tutorial in a safe zone before emerging out into the world as a juvenile. Juveniles in Path of Titans begin a long and arduous journey to adulthood. The road is fraught with danger since the young and weak dinosaurs are easy targets for adult dinosaurs that are looking for food or just to kill for sport. 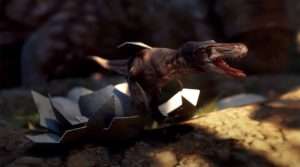 There is a rather steep learning curve with Path of Titans. Despite featuring a lengthy and in-depth tutorial, there are several things you need to learn on your own. This made me hate the title initially. At first, I actually only played for a couple hours before setting it down for nearly a month. It took me that long to cool off before giving it another shot.

Michelle’s note: Because of this, I created a new players guide for Path of Titans for my column, so be sure to check that out.

In terms of challenges, the map symbols aren’t clearly explained, and I had to figure out some of the swimming mechanics on my own. The controls can also be touchy at times. I have no idea why, but sometimes when I’m collecting items for a quest my dino will just start sprinting forward. I have also tried to have my dinosaur run away from attacking dinosaurs only to find it suddenly has no stamina. It can also be very difficult to control my dinosaur’s head while trying to fish. Even if I’m swimming forward and have the camera angled in that same direction, my dino keeps looking at its tail. 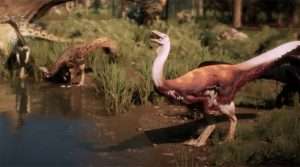 Another big gripe I have with the gameplay is the giant map paired with the difficulty of using waystones to meet up with group members. If your dinosaur dies, it respawns at a random location on the map. While that is great to avoid just respawning back next to your dinosaur’s attacker, it can put you on the opposite side of the map from your party members. With shorter legs, it can take up to 30 minutes for a juvenile dinosaur to just sprint across the map, and that’s without being cautious to avoid other dinosaurs. The waystones are a great way to get around this, but the game does not explain how to use them. The tutorial only shows how to send waystones, not how to accept them. It is only through piecing together a few internet tutorials and talking with more experienced players that I figured out how to accept a waystone invite. It shouldn’t be so difficult to learn how to use such a pivotal game mechanic. 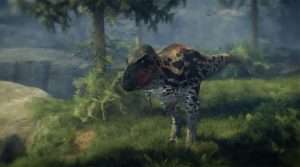 The graphics in Path of Titans are amazing when it comes to the actual dinosaurs themselves. The details players choose in the customization of their dinosaurs really shine. Unfortunately, it can be rather difficult to spot dinosaurs at a distance in the wild. The textures have a bad habit of fading, hiding important visual information. It can also be incredibly difficult to see anything in the different weather patterns. Sometimes the environment is unintelligible. Everything will turn white or pink/yellow, making it impossible to see. During the night cycle, I frequently have to have my dinosaur hide in what I hope is a bush because I can’t see anything in the dark. Sometimes it helps to go to a dark room in my house, but sometimes I still can’t see a thing. I do like the idea of weather or night cycles reducing visibility, but it doesn’t feel properly executed in the game. 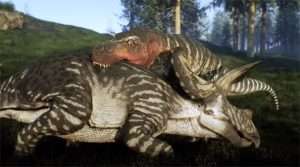 The audio is great . . . when you can hear it. Something about the audio is off with the Nintendo Switch.  At first, I thought the game mostly didn’t have sound. I remember thinking I had messed with settings on accident, because I couldn’t even hear my own dinosaur at first. The more I played, the better I was able to make out sounds. However, if you’re playing Path of Titans on the Switch, you must use headphones. Unfortunately, the sound mixing is still a little off. My baby Spinosaurus had such heavy footsteps, I was sure everyone within a mile radius could hear me. I had the headphones turned most of the way up to try to listen for signs of danger, but then when I went to chat the loud clicking of the keyboard was very painful. I even went to settings to turn the user interface volume way down, but it didn’t seem to make a difference. 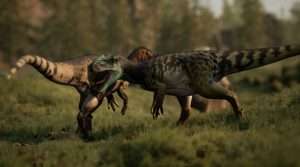 The game also has a bad habit of playing a small bit of music randomly. At first, I thought it was a nice touch, but then I freaked out once when the music began because I was afraid I wouldn’t be able to hear a threat approaching me. It would be beneficial to be able to turn this feature off or just get rid of it altogether. Honestly, the sounds of birds chirping and the bubbling streams in the distance is better than any music. As someone who enjoys being out in nature, I found the audio very immersive. For swimming dinosaurs, you can hear the audio change when you submerge under water. This makes the swimming feature all the more fun and relaxing. Despite the mixing issues, the quality of the sound is amazing.

For the most part, Path of Titans is very fun to play. In my experience, my enjoyment of the game is highly dependent on the other players on the server. I have spent hours having a blast questing with other players, and I have also wanted to rage quit after someone invited me to a group to just kill my dinosaur on sight. For every time I’ve found a great questing group, I’ve had three terrible or just meh experiences. Sometimes it’s just hard to form a group. Either nobody responds to your requests to group, or a group is formed and disbanded in 10 minutes. You’ve got to be flexible. If you get a good group, enjoy it while it lasts. If not, just focus on questing by yourself. Yes, it will take much longer to grow your dinosaur by yourself, but it’s just not feasible to be in a group all of the time. Also, accepting that death is inevitable at times for your dinosaur characters in Path of Titans is the key to having fun. Do not expect mercy while you’re playing as a juvenile dinosaur, because you’ll rarely find it. There have only been two times while playing as a juvenile dinosaur that I’ve had an adult dinosaur see me and ignore me when I wasn’t grouped with a bigger dinosaur. 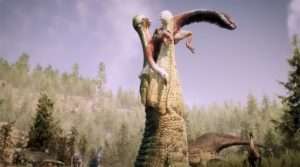 Path of Titans has been in active development since 2018. The game first released for player testing in 2020, and the Alderon Games website says the game is still a playable demo in active development. The Path of Titans Discord page lists several new dinosaurs they are working to develop, including more aquatic creatures and even some flying ones. Alderon Games also hopes to add new game modes, such as deathmatch, capture the egg, and last herbivore standing. An article was recently published on the Path of Titans development blog detailing their upcoming aquatic focused map, Gondwa, as well as improved swimming mechanics and aquatic biomes.

Creativity is front and center with Alderon Games’ approach to Path of Titans. In addition to constantly introducing new playable dinosaurs and features, Alderon Games offers players the ability to mod their own dinosaurs, maps, custom skins, and even game modes. The developer kit even includes tutorials to help players get started with their own mods. Anyone can also host their own community server, allowing them to create their own rules and showcase their custom mods. Several community servers also boast of increased marks for quests and fast passive growth. I’ve seen one mod claim you can reach adult stage in just 35 minutes with passive growth. It is worth noting that some of the community servers available are not accessible on the Switch. 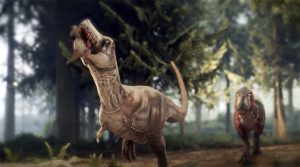 Between the continual updates and expansions and the community server modes and modding, Path of Titans has an incredibly high value and playability. Every time I think I’ve had enough and I’m ready to move on to my next game to review, it sucks me back in. I now have 5 dinosaurs I am raising on the official multiplayer servers and 3 adults across 2 different community servers.

Overall, Path of Titans earns 4.5 out of 5 GiN Gems. While the gameplay and graphics can be a hinderance, they don’t make me want to stop playing the game. Alderon Games continues to patch issues and expand gameplay with new dinosaurs, maps, and features. I’m excited to keep raising my little dinos and to check out the new Gondwa map when it releases.