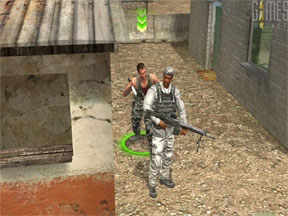 Jagged Alliance: Back In Action

One of the very first games I played on the first ‘modern’ game computer I ever owned, a supped-up 486, was Jagged Alliance. The game had it all. Tactical combat. Lots of cool guns. Mercenaries as characters who all had unique personalities and voices. And a great story about liberating a county, and making money while doing it.

As good as Jagged Alliance was, there was not a lot done with the series until later when Jagged Alliance: Deadly Games came out in 1995. But this was mostly a multiplayer type title, a series of small missions without an overall campaign. Then in 1999, Jagged Alliance 2 was released, with updated graphics, more mercenaries, better tactical control, and a new country to liberate, Arulco.

Jagged Alliance 2 proved just as popular as the original game, and many people have tried to copy or add to the gameplay ever since then. Unfinished Business and Wildfire were two official expansions, but other games have tried to copy the Jagged Alliance magic ever since then. And mostly, they have all failed, much to the sadness of true fans like myself who get excited every time we get a whiff of news about our beloved tactical shooter, only to be let down in the end.

So here comes Jagged Alliance: Back In Action, an official squeal. It’s really a remake of Jagged Alliance 2, complete with re-done cut scenes from the original. In theory, remaking Jagged Alliance 2 with modern graphics and control is a great idea, so long as the pot isn’t stirred too much.

Unfortunately, it’s mixed up far too much here.

Starting with the best of the positives, of which there are quite a few, is the mercenaries themselves. All your old favorites from JA2 are here, contactable through the AIM site on your laptop. Many of them have been given makeovers. Meltdown now actually looks kind of hot for example, but most of your old favorites look like you probably remember. The voice acting is top notch once again, with national accents and mercenary personalities coming through perfectly. And yes, some of the mercs don’t like each other, and will complain or even threaten to quit if put into squads with their enemies.

Inventory management is also still quite strong. There are tons and tons of guns in the game, plus different uniforms and armor, things to modify clothing and items, tools and even red herrings. You can really equip your squad exactly how you want now, assuming you can afford to buy the best gear, or are lucky enough to find it in the big bad world of Arulco, lying around in hidden caches or in the cold dead hands of your enemies. In fact, right up until you actually start playing the game, everything looks great.

There are two major problems with Jagged Alliance: Back In Action. First is the decision to change the game from a turn-based strategy title to a real-time strategy game with the ability to pause and give complex orders, which (in a clunky way) turns this back into a turn based game. It simply doesn’t work very well at all. The second major blunder is that this is the buggiest game I’ve experienced in years. It’s like this is a demonstration beta and not the full retail game.

Those of you who have played the other JA games know that as soon as an enemy was spotted, the game dropped into turn based, tactical combat. Basically, each merc was given action points based on their dexterity and could move and shoot or otherwise act until they ran out of points. Smart players would save points on certain mercs to act as overwatch specialists. Grunty always interrupted the enemy for me in those old games, allowing me to take shots at the bad guys during their turns. Even so, this gameplay element wasn’t perfect. You would often get killed when an unseen gunman came around a corner and fired into you while you sat there helpless and out of action points for that turn.

Still, it was a hell of a lot better than the Back In Action system. In theory, the new system should work well, but it just doesn’t. You can either directly control a mercenary, firing at targets as you like, or you can program a series of orders for your entire squad and then unpause the game and let them carry them out. The problem is that as soon as the enemy starts moving, the orders pretty much become worthless. Don’t bother setting things up more than a few seconds into the future.

Here is how my first engagement went: I had one mercenary looking in a window with his silenced SMG aimed. Another was guarding the corner of a building and a third was watching around the other corner. I had my silent killer ready and my guards on his flanks in case things went bad. In JA2, this would be a great setup for a small team.

As soon as an enemy came into view inside the structure, I ordered the first guy to shoot five times. But for whatever reason, he didn’t do it. Instead of starting to fire, a countdown timer began ticking instead. Apparently it takes about four seconds for my guy to squeeze off a shot once told. During this wind-up time, the enemy moved out of sight, so the orders were wasted.

Later on, I actually did get off a shot, but missed. Even though my weapon was silent, he still noticed me and began running outside. When he arrived, the guy guarding the flank automatically paused the game for me, so I ordered him to shoot that punk up. Only nothing happened. Apparently if you are right beside an enemy, you can’t shoot them. I’m not sure why a trained mercenary can’t use a pistol in close quarters combat, it’s kind of what they were designed for, but anyway he just stood there while getting chopped in half with an axe. My guys stood completely still, ignoring their orders while the AI just chopped them up.

Eventually, after many reloads and retries, I was able to win most brief engagements, but it was a lot harder than it should have been because I was fighting the interface more than the enemy. It took me three hours to clear the very first sector in the game, not because the AI was so intelligent, but because the interface is so bad. In JA2, it took ten minutes tops to clear the first zone.

Controlling a single mercenary in real time is an option, but that means the others won’t be doing a thing. They will stand there and get shot, stabbed or beaten without resisting unless ordered, which makes the direct control option kind of pointless in this type of game. You can try to wrestle with the command structure, stringing a bunch of orders, but you can’t think too far ahead because the situation is too fluid for long-range tactical planning. I miss the days when I knew, for example, that my merc had 12 action points left and could shoot an aimed shot by spending six of them. So I knew I could squeeze off two shots. Here, it all seems so arbitrary. Why does it take four seconds to shoot? Would a faster merc shoot faster? There is just no easy way to tell these things.

This is all made worse by the bugs in the game, with the worst being pathfinding. If you have one mercenary watching for an enemy and order a second to move past them to a new position, more often than not the two of them will begin to ‘dance’ with each other, moving in circles and constantly clipping until one eventually pushes the other out of the way. While funny in real time, if you are depending on them to execute a precise series of turn-based orders, it will get someone killed every time. I’ve even seen the enemies trip over themselves quite a bit too. I almost didn’t shoot this one group of bad guys because they were obviously busy practicing for their next River Dance performance. That’s just a sad state of affairs.

The enemies are also near-brain dead even when not circling aimlessly around each other. They don’t use any strategy other than charging at you head first. The game compensates for this by putting a lot of them inside each map. Some of the later fights can have upwards of 50 bad guys. Had there been any fog of war at all, it’s thankfully turned off, their sheer numbers would make fighting them nearly impossible. As it is, you are probably going to get killed a lot as they throw waves and waves at your small team. They have no self-preservation instincts at all. So long as one of them can kill you, they don’t care that 40 others had to die. Guess they are pretty loyal to their queen.

There is a tactical map as well, just like in JA2, but you really can’t do too much with it. At least a recent patch lets you train up militia to defend towns you’ve conquered from there. You used to have to give each member of the militia their weapons by hand before that patch made life a bit easier. So it’s nice to see the developers are evolving the game based on player demands.

If they are listening, then I’ve got a request. Please add in a ‘traditional gameplay’ mode where we can have our beloved action points back. That system wasn’t perfect, but it was fair and everyone was on the same page, enemies and friendlies alike. Trust me, your players will appreciate it. Kudos to you for trying something new, but really, if it’s not broken, don’t try to fix it.

As it stands now, Jagged Alliance: Back In Action is yet another in a long string of disappointments from people trying to add to a great series. This is the first ‘official’ release to fail so badly however. I wanted to like it. I really did. And I tried real hard, spending hours just to make it work. But in the end, I did what I think a lot of core fans will, turned it off and loaded up Jagged Alliance: Wildfire, or even JA2 itself. And I’m having a great time in Arulco again, just not with this game.