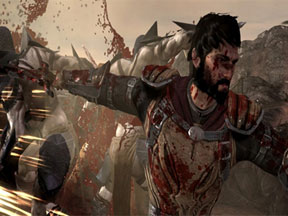 With the Archdemon defeated and the land of Ferelden slowly but surely on the mend, fans of the Dragon Age series have been anxiously awaiting the next chapter for quite some time. Now at least knee deep or beyond into Bioware’s latest sequel, let’s pause to take a deeper look inside this next big adventure.

We know that through a mass effort and great sacrifice, the Grey Wardens helped to turn the tide in Ferelden’s darkest hour and have begun to close the book on the world’s fifth Blight. However, the impact of this latest Blight is far from over. Hordes of dark spawn still roam the lands freely and must inevitably be dealt with. A new King or Queen (depending on the decisions you made in the first one) sits upon the throne of Ostagar attempting to fill the huge shoes of the recently departed King Kalen, the bitter taste of battle, betrayal and defeat still fresh on everyone’s mind. And then there’s the situation of Lothering, a neighboring village that had a majority of citizens slaughtered as it was burned to the ground. Surprisingly, it’s here in this small decimated village that our story begins.

When the story picks up we flashback to shortly after the Battle of Ostagar where following the slaughter of the Grey Warden Alliance the dark spawn now turn their focus to Lothering. It’s here we’re first introduced to a new champion by the name of Hawke and his family who have just narrowly escaped the attack on the village and are desperately fleeing for their very lives with dark spawn hot on their trail.

Now if you’re a serious veteran of the world of Dragon Age you will probably find yourself a little slow to warm up to the new role change. After all, to go from the glorious and courageous, highly respected and sacrificial role of Grey Warden hoisting the weight of the world on your own shoulders to an ill-fortuned refugee on the run from hordes of dark spawn is indeed quite the adjustment. And what of all your cool companions whom you engaged in countless hours of conversation with in an effort to not only win their loyalty and respect but friendship and even more? What of their lives and fates following the Blight? There are so many questions and rocks left unturned from the first game that it might even make one wonder about the direction of this latest sequel.

Well, wonder no more, because despite a slew of unanswered questions there are more than a few nice changes going on in this year’s game to help distract the wondering mind, one of those being in the graphics department.

Right from the start, it’s clear that the new game looks fantastic, sporting a much more polished and rich look than its predecessor. Everything from character models and outfits to extensively detailed backgrounds and environments help take this sequel to the next level.

Perhaps one of the most important key staples in the success of the first game was the incredible voice-over and extensive dialogue system it brought to the role-playing table. It was all done in such a way that it seemed like nearly every character regardless of how significant or not they might have been had a story and personality of their own, helping to make for an even more genuine social experience during your ventures. Add to that now a fully voiced-over main hero for fans to play and you’ve got something really special.

The most significant overhaul in all of DA2 is undoubtedly its new combat and skills system. The battle scene is much more fast-paced and gritty this year round allowing players to issue commands on the battlefield more quickly and in turn receive a more speedy response from their companions as well. Most may recall from the original game the delayed responsiveness of accompanying companions given orders to execute during battles, which made for quite the struggle on more than a few occasions. It also felt like players had to watch and nurse their companions a little more than usual during combat situations, despite the fact that their battle tactics could be somewhat customized.

Thankfully, with the new fast-paced and fluent combat system now in play, players can not only more easily direct the battlefield and have the kind of success they would have liked in the first game, but they also don’t have to watch their new sidekicks backs so much as this time round they seem to display the ability to hold their own during battle. It’s a big improvement which really helps to enhance overall game play experience.

On to a newly enhanced skill system, upon leveling up, you can now train your character up in various fields via a new skill tree system which appears to be much more organized and in-depth than the one from the original game. The skill tree works similar to that of the "dress-sphere" system of Final Fantasy X-2 some may recall and it works really well here in this new game allowing players more freedom train up their characters more to their personal likings. As you become stronger throughout your ventures new specialty classes will become available to you helping to add some real flavor to your skills training.

Although Dragon Age 2 ships with a host of nice new features and upgrades it, much like the first game it’s not without its minor issues. For starters, it doesn’t feel quite like a sequel at all and as a result it may take veterans gamers a little longer to warm up to the new direction the series has taken. It would have been nice if just a bit more reference had been given to the original game and perhaps to have been able to see a few more special appearances from characters of the first game.

Also a bit surprising to see in this year’s game was the issue of rehashed dungeon mapping. It was a bit of a let down to play out new quests in the same dungeons previously visited from older quests. There was no evidence of this kind of level rehashing in the first game and it kind of takes the wind out of the sails when it comes to taking on new quests.

Players also won’t have the option to fully customize the armor and attire of their companions this time round either as the game only limits customization of companion characters to weapons, shields, and accessories. You can however purchase companion armor upgrades down the road which slightly modify and boost the defense of their default uniforms. Some might argue that this is a good thing given the industry’s new focus on simplicity in gameplay, but hardcore armor buffs might be a bit disappointed.

None the less, at the end of the day Dragon Age 2 is a solid game through and through. Though the story takes an unexpected turn, it’s not too long before you warm up to your new role. The game is visually impressive and the newly enhanced combat system and skills training trees do much to deliver an enjoyable game play experience. On top of that, the voice work and dialogue of the game is as superb as it was in the original game.

Easily worthy of a solid 4 GiN gems, DA2 continues to push the envelope in the way its predecessor did not that long ago.