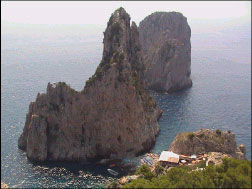 I have never been to the island of Capri, but if I ever go, I am fairly sure I will be able to navigate around the place.

That is because I just spent the weekend playing A Quiet Weekend in Capri, the latest puzzle adventure game from Got Game Entertainment. I’ve played a lot of the Got Game titles, including RHEM and my previous favorite The Watchmaker. Capri takes the cake however.

The developers Silvio and Gey Savarese must have spent weeks going around the island. There are over 4,500 photographs in the game of Capri, all configured so that you can walk around the island from shot to shot. There is an automatic map that keeps you from getting lost.

The game is played in a slideshow type fashion. You look at one photograph and there are several ways you can go. When you choose which way to go, you are taken to the next photograph. Often times part of the next photograph is included in the one you are looking at. So you might see something interesting at the far end of a street, and then when you click to go in that direction, the object is front and center in the next slide.

The game starts out innocently enough. You are a tourist that has come to the island to visit. The first part of the game is basically a tutorial. You have to learn how to pay a cab driver which basically teaches you how to use your inventory and interact with people in the game, plus a little bit about how to read your map and generally use the interface.

The true fun starts after you get to your hotel. The soundtrack of people talking and cars moving around and the sounds of a generally living island suddenly goes quiet. You lose consciousness. Guess you should not have had the fish back on the plane.

Since you can’t check into your empty hotel, you begin to wander the island. I am not sure how they did this, but all the photos are now devoid of people. Either Capri is really sparsely populated, or very cooperative. How they took thousands of pictures of the empty island is beyond me. Considering one street might be composed of five or more photos, you would think someone would have crept in. Perhaps some type of photo editor was used to remove any stray people, but seeing a real place like that completely empty is really kind of creepy.

Also, did they literally photograph every street on the island? Every alleyway and side street seems included in the game, even if that area did not have anything to do with the plot. I think that is really cool.

There are a few people still living in the island. But you have to journey far and wide to find them. When you do, they all seem to know who you are, though you don’t know anything about them.

Puzzles are well integrated into the game. They run the gamut from the pitifully easy to the highly challenging. Part of the fun is just finding the puzzles to begin with. The island is so huge, I literally wandered around for about an hour before I realized what to do next. Thankfully Capri is really beautiful, so I doubt you will get bored.

The soundtrack is really nice and was apparently created by developer Silvio Savarese himself. You get a separate CD with all the music on it, which is a very nice touch in a $30 game.

The lowest score in our review (four of five is not really that low) goes in the gameplay category. Slideshow interface games are really kind of past their prime, and even the actors you talk with are just still pictures. A help button lets you see all the hotspots in a certain screen which helps you figure out if the slide you are on is just scenery or has important items or information. Also, a journal records everything that is said, which is helpful when you need to refer back to conversations to look for clues. I don’t mind the interface, but some people, especially non-puzzle gamers might have a bit of a problem with it if they did not grow up playing those types of games.

I spent a quiet weekend playing A Quiet Weekend in Capri. Besides feeling like I actually spent a weekend on Capri instead of in my dark basement, I had an enjoyable time and experienced about 30 hours of interesting gameplay. It’s great to see people trying new things, and putting the entire island of Capri into a game is certainly a challenge. Capri is more than worth the money, and earns four and + GiN Gems overall. I can’t wait to see what Silvio and Gey Savarese come up with next.