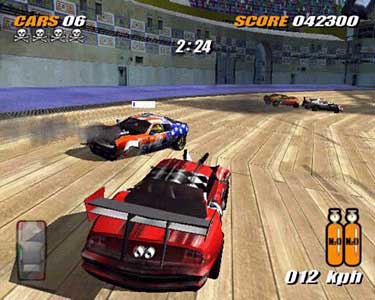 Had a long day at work because your boss decided to take all your co-workers golfing except you? You’re always running late in the morning and the lady at Dunkin Donuts never gets your cream and sugar right? Your favorite TV show got interrupted by a "CBS Special Report?" The dog ate the entire final draft of your term paper and your printer is fresh out of ink? Rumor has it your girlfriend has a crush on the school bully? Your favorite singer got voted off American Idol?

There, there now. There’s no need to be angry at the world. Instead use the talented aggression skills you possess for higher, more destructive purposes. That’s right, properly place yourself and your anger behind the wheel of a two-ton wrecking ball of supped-up American Muscle. Let the aggression you harbor be the horsepower behind that V8 engine and the frustration that floods your soul be the weight that holds your lead foot to the floor as you CRUSH, KILL,ANNIHILATE, AND DESTROY your opponents in Studio 33’s newest smash-fest hit, "Destruction Derby Arenas."

This game has got all the right ingredients to satisfy your appetite for destruction.

Destruction Derby Arenas puts gamers in the driver’s seat of their choice of up to 20 different muscle cars. These aren’t your ordinary hot rods though. Decked out with impact bumpers, front and rear protectors, hood intakes, booster packs and crazy-wild paint schemes, these rides are all set for some vehicular manslaughter.

The tracks and arenas are equally as wild and nasty as the rides themselves. Each has its own version of hellish traps, rising bridges or high-fly ramps, sharp turns, and other destructible obstacles. In the beginning riders only have access to the "Airfield," "Steelworks," and "Chinatown" arenas but as you delve into the game you will be able to unlock many other race arenas like the "Subway," "The Casino," "The Harbor," and the madness that is "South Central Road Rage."

"Arenas" breaks down into seven different game modes. However, only three of those seven game modes are accessible offline. If you’re not set up for online activity, you’re out of luck on the other four modes.

The "Championship Mode"(offline) is split into four "rounds." Each "round" has three race circuits and a Destruction Bowl as the final event. The object is to rack up an insane amount of points in each event as all the scores will be tallied into one grand total to determine the champion of each round.

In the racing events you get extra bonus points for finishing in either of the top three spots, but simply crossing the finish line in a favorable position doesn’t guarantee you the most points for that particular contest. After all, destruction is the main theme of the game. If you really want to rack up the points you’ve got to be a real maniac out there.

First off, you’ve got to make use of any chance you get to drive over or through destructible obstacles like fire hydrants, bus stops, dumpsters and phone boxes. The bigger the collision, the higher the amount of points awarded. If you time a car on car collision perfectly you can send your opponent into an unstoppable spin. The more revolutions your opponent does the more points you’ll be rewarded. You can also get big points for successfully landing jumps, power-skidding, riding on two-wheels and sending your car into a barrel roll.

Power pick-ups are placed all around the tracks and arenas to help keep things interesting too. "Boost" pick-ups help to replenish our vehicle’s Nitrous Level to keep you ahead of the game. "Rocket" pickups rapidly propel your car forward upon contact. These are idea for making big air off ramps and clearing those extra long jumps. "Super Grip" pickups found in the icon-form of a tire make cornering maneuvers easier and faster.

You’ll also want to keep an eye out for "Health" pickups as they repair 50 percent of your vehicle’s overall damage. There’s plenty of other pickups to acquire including, "Shield", "Resurrection", "EMP", and my favorite the "Trigger" pickup. Slam into one of these TNT crates and you’ll trigger some nasty and destructive trackside events which cause all kinds of problems for the cars ahead of you.

Championship mode in pretty much all of the offline modes combined into one, but you can also choose to play our favorite event(s) separately. If you enjoy those high-speed, hellish racing circuits you’ll want to spend some quality time in the "Wrecking Racing Mode"(offline). The more tracks you unlock in the Championship mode the more you’ll appreciate the variety this mode has to offer.

Or if you’re a "smash-and-crash" gamer like me, you’ll go straight for the juggler in classic "Destruction Bowl Mode". It’s you versus 19 other drivers in the circle of death. In this mode the object is to stay alive for the specified time limit and have the largest amount of smash points at the end of the event.

If you really wanna enjoy this game, you gotta play it online though. The online game modes really put this game on the map and you get a chance to meet new friends to slaughter. Mwahaha!

Anyhow, if you play online you’re gonna have a blast playing your choice of four fun and action-packed modes: "Speedway," "Capture the Trophy," "Pass Da Bomb," and my favorite, "Last Man Standing" mode.

"Speedway" mode is strictly for all the race freaks and speed demons out there. In this mode "burning rubber" is the unspoken rule. The question is can you handle the speed?

"Capture the Trophy" is very addictive and a lot of fun. At the beginning of the event a trophy is placed in the middle of the track. The object is to pick-up the trophy by driving over it and then hold onto it as long as you possibly can. Of course, this is easier said than done as other drivers are gonna be ramming you from all sides in an attempt to steal your new found award. Big points are awarded to the player or players who hold onto the trophy for a substantial period of time. At the end of the event the player with the most points (not the trophy) is declared the winner.

"Pass Da Bomb" mode is pretty cool, but requires a bit of skill. Three bombs are placed in the center of the bowl. At the start of the contest feel free to drive over and grab one. Hold onto it as long as possible for big points. The only thing is once take the bomb, its 30-second timer begins to wind down to self-destruct. When the timer gets low you have two choices: Pass the bomb off on the nearest unfortunate driver or find a new bomb to reset the timer and buy yourself more time and bonus points. If by chance you’re the very unlucky rider the bomb explodes on, 1,000 points will be deducted from your score. The player with the most points at the end wins the event.

"The Last Man Standing" mode is what "Destruction Derby Arenas" is all about. This is where the boys are separated from the men. Once again, it’s you against the world, but this time the rules have changed. There is no time-limit, there are no add-ons and there are no pick-ups. In the end there can only be one: The Last Man Standing. And if by chance you’re one of those riders who like to cower around the corners of the ring while your buddies take the brunt of it, you’ll be disqualified for "no contact" after 60 seconds.

So that’s DDA in a nutshell. The bottom line is if you have the appetite for mayhem, chaos, and destruction plus online capability there is no doubt you will love this game. If you don’t have online capabilities, then I only recommend this one to the hardcore followers of this genre. Overall though, this game is fairly sharp, has a nice gameplay engine, a hint of originality, and a healthy does of replay value, especially online. DDA motors its way to a respectable 4 Gin Gems for Studio 33’s smash-fest hit.