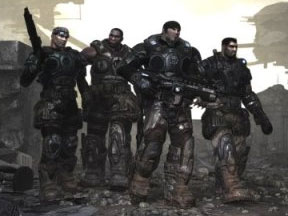 Chainsaw bayonets, gorgeous visuals, and the return of Terry Tate. What more could you ask for? It looks like Halo 2 has finally met its match on Xbox Live!

After an impressive showing at E3 2005, I was hooked by Gears of War. Granted I never got to play it until the final release (the E3 2006 multiplayer demo was behind closed doors,) I was compelled to play what looked like the potential killer app for Xbox 360, just in time for the PlayStation 3 launch.

I can finally claim that not only do we have the killer app that 360 fans have been looking for, but we may have our Game of the Year winner! We already knew that Cliff Blezinski (aka CliffyB) was a genius at level and character design, but who would have thought that he could create a masterful game design centered on cover, tactical shooting, extreme violence, and "destroyed beauty?"

The concept of destroyed beauty is demonstrated well on a war-torn planet called Sera. Fighting over limited energy resources, the nations of Sera fought relentlessly, until the discovery of a new energy source, called Imulsion. But despite Imulsion, and the potential of a new Golden Age, the smaller, Imulsion deficient nations battled over the five larger nations, triggering the Pendulum Wars, a conflict that lasted seventy-nine years.

But with all this infighting, no one was prepared for Emergence Day: when the Locust Horde erupted from the ground. A quarter of the world’s populace perished, and the Locust took control over all key locations, while humans retreated to the Jacinto plateau, whose solid granite proved impenetrable to the Locust. It was there the humans did the unthinkable, using chemical weapons and orbital beams to scorch the surface!

Since Emergency Day, Jacinto plateau was turned into a military fortress, and the Coalition of Ordered Governments was established. Despite denying civil liberties under martial law, the COG proved wildly popular as they were the only force capable of stopping the Locust once and for all.

Fourteen years have passed since Emergence Day, and Marcus Fenix is one of those COG soldiers, but ended up jailed on charges of cowardice and dereliction of duty. But when the Locust attempts to attack Jacinto, he is sprung from prison by his closest friend, Marcus Santiago, and thrust into battle.
It seems that the COG may have found a key weapon to destroy the Locust: the Lightmass Bomb. Fenix and his COG soldiers are sent to deploy the Lightmass.

The first thing to remember about Gears of War is that it is not meant to be played as your typical shooter. Going all run and gun is a one way ticket to the Crimson Omen, aka death. Taking cover is key to survival, and the control scheme that Epic created makes taking cover a breeze. The A button is used for all means of cover, whether it is leaning behind a concrete slab, spinning from one pillar to another, or the impressive Roadie Run, which consists of running from a crouched position, accompanied with a unique camera angle that bobs and weaves as if it was shown in a military documentary.

When in combat, the action is fast and intense. While the weapons used might be considered standard fare (assault rifle, shotgun, sniper rifle, grenades, and a bow with exploding arrows,) there is one well known treat that will change the course of close range combat forever: the chainsaw bayonet! Whoever thought of adding a chainsaw to an assault rifle should be heralded as a god, because this is the best combination since chocolate and peanut butter. As soon as you rev up that chainsaw and slice into some Locust guts, the ensuing spray of blood on the monitor screen is truly a sight to behold!

It is not just the aftermath of the chainsaw bayonet that makes Gears such a beautiful game, it is the use of the third generation Unreal Engine. When I saw the very early build at E3 2005 it looked great, but ran terrible. I had no idea that the finished product could run as great as it looked. Very seldom does the game slow down, if it ever slows down at all. In fact, the only time there is signs of slow down is during the cutscenes, which are also done in real time! There is no doubt that Gears of War is the best looking Xbox 360 game on the market, but when it is being compared to even PlayStation 3 titles, you know you have something really special.

The visuals also impress in terms of the varying ranks of the Locust Horde. Sure we have our basic soldiers (drones, grenadiers, and snipers,) but the special units are worth mentioning as well. The Berserker in particular deserves mention. Picture a combination of a T-Rex from Jurassic Park (who shares the same movement based visual acuity) and the Juggernaut from X-Men (who smashes through walls like they are paper) and you have an idea. Add to the fact that she is invulnerable to conventional weapons, and can only be destroyed by a particle beam called the Hammer of Dawn, and you know what terror is all about.

There is also the Seeder, which acts like an anti-aircraft launcher that shoots out Nemecysts, living rocket bombs, and the Corpser, a giant spider like monstrosity. Then there is the Brumak, a twelve meter terror designed like a living tank.

Gears’ epic score is also worth mentioning, as is the quality of the voice acting. The COG soldiers sound like they should: gruff, mean, vicious, but none as impressive as the role of Augustus Cole, played by Lester "Mighty Rasta" Speight. That name might not sound familiar, but he is better known by his character Terry Tate: Office Linebacker. In some of the funniest Super Bowl ads ever made, Tate dished out punishment to incompetent office workers, and Rasta continues that role dishing out punishment to the Locust. I was just waiting to see Cole stand in front of a dead Locust drone and yell out "you killed the joe, you make some mo’!"

While I don’t play many shooters on Xbox Live, Gears of War is a welcome addition. Game modes include Warzone, pitting COG and Locust fireteams against each other, Assassination, where the goal is to either kill Colonel Hoffman (COG) or General RAAM (Locust,) and Execution, a Warzone variant where kills can only be made with a close range attack, either the Chainsaw Bayonet or a Curb Stomp. But what is more impressive is being able to play the entire single player campaign with a partner on Live. And when you get to the higher levels (Hardcore and eventually Insane,) you’re going to need the help.

A lot of people complain the single player campaign is a bit short, but when you play on Casual difficulty, it’s pretty easy to blow through all the firefights. But when you get on Hardcore difficulty, the firefights are more intense and last longer. When approaching Insane, prepare to write your will. EGM wrote in a review for Halo when done, "you must play this game in Legendary mode." I can easily say the same thing about playing Gears on Insane mode! It is truly an experience to behold!

Gears of War is truly an epic masterpiece, no pun intended. Just recently it was announced that it has surpassed Halo 2 as the most played game on Xbox Live. It was also announced that the series will be made as a trilogy, so I’ll be looking forward to seeing how the trilogy ends up. I just hope I won’t have to wait six years and purchase an Xbox 720 to play it!