HALO: Renegades takes the popular character Rion Forge of the nova hot novella HALO: Smoke and Shadow and gives her a full novel treatment. The renegade Captain of a salvage ship she skirts the law of both United Nations Space Command (UNSC) and the fractured alien warlords in the post-Covenant world, Rion is a fan favorite because she is not a soldier or a spy, but something different, a civilian living in the HALO world.

Author Kelly Gay created this character in a short story collection and she was an instant hit. I believe because Rion Forge has the bones of a pulp hero archeologist, the muscle of a modern conflicted character and the heart of an explorer. Her ship, the ACE of Spades, carries a colorful crew into adventures that uncover lots of hidden HALO lore, something the fans want in their games but desire to no end in their books. 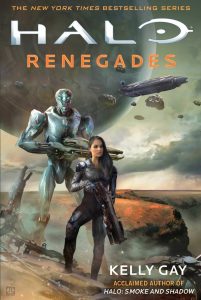 This is why the HALO books place in the franchise is so special. You can get some story from the games and some knowledge of the universe, but the fiction gives you double helpings of both. Rion Forge, in this book, not only interacts with the AI of Little Bit but also uncovers the final fate of her own father, UNSC Marine Sergeant John Forge.

[amazon asin=1501192795&text=Dive deeper into Halo lore with a copy of Halo: Renegades from Amazon!]

This isn’t the only reveal in the book, it also takes our hero back to Earth itself. The reader also gets more secrets concerning the origin of 343-Guilty Spark, the namesake of 343 Industries. But to me these weren’t as exciting as the other exotic locales that Rion visits.

One such place is Komoya. This city is described as, “hundreds of derelict, abandoned, and decommissioned starships sprawled over eleven square kilometers of mudflats and low plains, all connected by a web of dirt roads and makeshift bridges.” This dense description would be enough for most sci-fi writers but Gay goes further and adds a “decrepit colony vessel that landed here almost sixty years ago and never left.” This kilometer long ship sits in the center of the junkyard city and acts as a perfect centerpiece to start a book about an interstellar adventure.

The characters also do not disappoint. Rion’s crew is made up of a small but diverse group; Ramsey “Ram” Chalva, a veteran salvager, Lessa the pilot from a poor colony, her brother Niko and two different AI.

The Office of Naval Intelligence (ONI), usually the shadowy heroes or anti-heroes of the game and most of the fiction are regulated to the side here. The focus is on the group of adventurers who chart their own path through the conflicting loyalties and governments and who take care of their families and friends.

In other words it is the HALO book about the part of the HALO universe that is usually ignored, and it is better for it. I recommend this book and the previous novel to any HALO fan and even to those who know about it tangentially, but love character driven sci-fi.