Coming in at 150 pages HALO: Smoke and Shadow is not so much a typical HALO novel as a fast paced, nova hot novella. Its difference lies in that it doesn’t revolve around the soldiers of the United Nations Space Command (UNSC) or the Office of Naval Intelligence (ONI). It takes a detour and focuses on some interstellar salvagers who go into war zones, exploring ancient alien artifacts and war refuse, bringing back items of incredible worth.

The main character in Smoke and Shadow is Rion Forge, the captain of the salvage ship, Ace of Spades. Her father, UNSC Marine Sergeant John Forge, disappeared on the fabled ship, Spirit of Fire. Players of HALO: Wars will be familiar with the insubordinate but brave Sergeant Forge 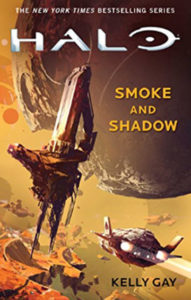 Rion possess the same brave, self-sacrificing leadership of her father with a canny business sense of a professional treasure hunter. Fans of the game Uncharted, Indiana Jones movies, or people who love reading about the adventures of Allan Quartermain or Professor Challenger will enjoy this tale and its main character.

Rion’s successful salvage business is in no small part owed to her diverse and capable crew. Each one has a different story that is explored during this diverting tale. The writer rotates her third person narrative to each of them. Two of them stand out.

[amazon asin=B01M0HWCQF&text=Grab a kindle or audiobook copy of HALO: Smoke and Shadow from Amazon!]

Cage, the stoic ex-Marine, is Rion’s close friend, confidant, and occasional lover. He is a large, muscular, military man who follows orders well, has great discipline but obviously needs a profession that requires camaraderie and danger. Their relationship shows some friction over her personal risk taking. Rion is the kind of captain who believes in leading from the front. Cage respects that, but can’t help grumbling about some of the danger she puts herself in.

Another member of the crew, Lessa, seems to the opposite of Rion but in a way that compliments rather than conflicts. She’s described as, “blessed with a friendly face, a beguiling smile, and a mop of tight blonde curls”. Lessa uses a soft-spoken charm rather than a commanding presence to get things accomplished. An orphan on a chaotic mining colony she followed Rion, a tall, athletic woman with dark hair first as someone to steal from and then as someone to follow into adventure.

This story takes place after the Covenant Wars, where remnants of the defeated alien hegemony vie to wage terrorist warfare against humanity and their former allied alien races, which now only want peace. It is an outgrowth of a shorter narrative in the book of HALO short stories Fractures by the same author. It is one of the best pieces of HALO fiction I’ve read, not because of how it adheres to the HALO universe, but because it departs from its normal narrative and strikes out in a new direction. I’m sure this plot would make a great HALO game.