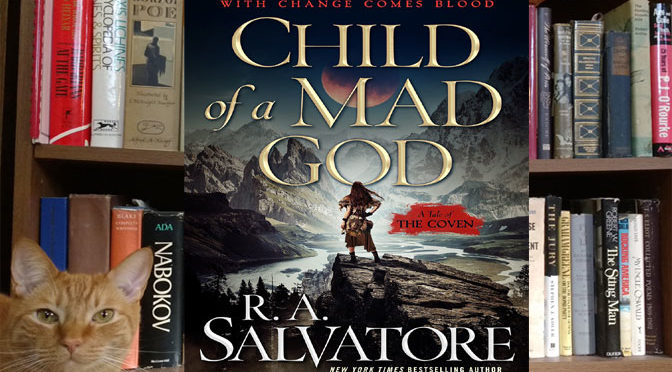 Child of a Mad God:
A Tale of the Coven

R.A. Salvatore’s latest dark fantasy features a female protagonist named Aoleyn who is raised in a terrible tribe that mistreats women much like the present day Boko Haram. So expect kidnappings, murders and worse along with a woman who fights back against this systematic abuse. This novel is set in his DemonWars universe, within the world of Corona and will be the first of his Coven Trilogy. Previous novels in this world were “The Saga of the First King” which featured “The Highwayman.”

The novel wraps a “coming of age” story within a medieval fantasy world reminiscent of Andre Norton with the reliable R.A. Salvatore’s signature complex characters and descriptive fighting scenes. “Child of a Mad God,” is the beginning of a series centered Aoleyn and is not for those who want a neatly wrapped up narrative. Salvatore spaces his stories over at least three books. So if fantasy epics are your go to then buy this book! 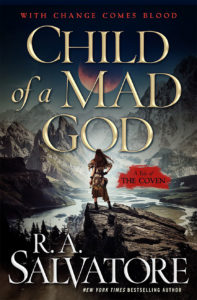 Another character in the book is the trapper Tallmadge. A good man who chooses to live on the edge of civilization, his wanderings put him up close to the northern mountain lands of Aoleyn’s tribe, the Usgar. His tragedies come from the deaths of those he loves during his journeys as a free man rather than a having a hostage background, like Aoleyn. His introspection and gentleness are a contrast with the necessary fierceness and suspicious nature of Aoleyn.

The narratives navigate between both of these characters broken up with the occasional excerpts of a journal written by Aydrian Wyndon, a prominent character in the Second Trilogy of the DeamonWars Saga. Aydrian’s journal, called “In My Travels”, talks of himself as a former “tyrant king” and who now wanderers across the lands of Corona. His journal takes a philosophic tone that comment on some of the characters in “Child of a Mad God.” They are written in such a way as you’re not sure how far before, or after, his meetings and judgments on them take place.

[amazon asin=0765395274&text=Jump into this brand new fantasy series from master storyteller R.A. Salvatore with a copy from Amazon!]

The magic of this world involves being attuned to crystals and finding inner powers that only a few possess. The terrible tribe Aoleyn is raised in, the Usgar, utilize crystals to grant their warriors magical abilities. This magic can be used to strike at their enemies with arcane flame, let them leap great distances or even heal them after suffering damage that would kill a man many times over.

It is the woman of the Usgar tribe, using these magical crystals in enforced servitude, that let the male warriors enjoy these benefits. It makes the Usgar men both covet and resent their women’s magical powers. This makes Aoleyn, with her natural aptitude and obvious confidence, desired and despised.

One of R.A. Salvatore’s strengths is how he takes present day conflicts and encapsulates them into heroic fantasy. The abusive nature of the Usgar Tribe to its women and the child kidnapping and subjugation find easy parallels in the terrible areas of our world where failed corrupt governments fight brutal fanatics on the fringes of their barely controlled nation-states. This book puts how women are waged war on and waged war with in these terrible circumstances.