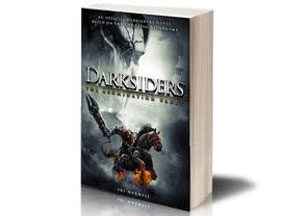 Author Ari Marmell Does It Again

The Darksiders inspired novel ‘The Abomination Vault’ deals with larger than life characters in a world that recalls the more extreme Gnostic gospels. In this world the four horseman of the Apocalypse are agents of mysterious powers that try to maintain a cosmic balance in the struggle between angels and demons. These demigods fight to forestall the dominance of either group through the powers granted them by the ‘Charred Council.’

The antihero of this novel is the horseman Death who, like the biblical horseman, rides a pale horse. Unlike in the bible, he is not a harbinger of Armageddon but someone who guards a vault that holds world-ending weapons. He and his three other siblings War, Strife and Fury belong to a race of beings that existed before both the angles and the demons and are the last of their kind.

The fight scenes in the book have the feel of the game. Both Death and War perform feats of cosmic fighting that would rival those of the movie Thor. They also meet up with the sultry succubus-like Lilith a character that lives on the outskirts of Hell and is somehow tied to Death by bonds only alluded to in the story.

Lilith has a subtler agenda than most of the characters in the book. I would have liked to see more development of her character. The fact that two of her rogue servants cause the problems that the horseman Death must confront makes the reader wonder how much she is really involved. Is all this cosmic fighting and magical weapons race a byproduct of the eternal fight between the forces or have some people started acting as double agents?

The characters, despite their titanic powers and problems, are given senses of humor. The writer gives them some human attributes that inform their superhuman strengths. This is good since it would make the book like one of those German Opera’s that Bugs Bunny so lampooned if it took itself too seriously.

Ari Marmell, the writer of this game-inspired novel, has written several books, including a novel in the Magic: The Gathering universe called Agents of Artifice. He has also written for Dungeons and Dragons. His gaming background and his sense of humor have made Darksiders: The Abomination Vault a fun read that fans of the game shouldn’t miss.