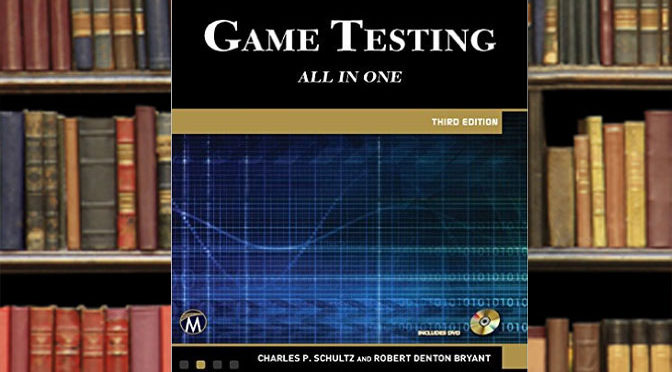 Game Testing: All in
One, 3rd Edition

The Game Testing: All in One, 3rd Edition textbook opens up with a great and geeky quote, “It is up to the game tester to advocate for the players by breaking the game before the player ever gets to play…Like the Nights Watch in Game of Thrones, we are the anonymous, out-of-sight, and unsung heroes of the realm of video game development. “

When a video game is play-tested well, we the players, rarely appreciate all the work that goes into it. This textbook, rigorously academic but without being pedantic, is not a quick read but a deep one. It tests the reader at the end of every chapter and gives the answers, with an explanation in the appendix. In general the text builds on its lessons chapter by chapter until you can look down and see a well-constructed skyscraper of a textbook.

The First Chapter continues in the vein of geeky while giving a good lesson with the Two Rules of Game Testing.

The references to The Hitchiker’s Guide to the Galaxy and The X-Flies made me smile. It also hinted at the time compressed nature of game testing and the many pitfalls such a process engenders.

As a player and reviewer my favorite is Chapter Three: Why Testing is Important. 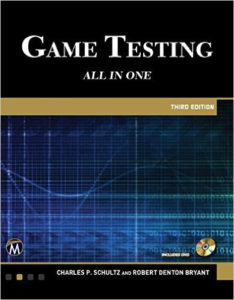 This chapter outlines with an overarching perspective such core problems as: orthogonal defect classifications like function, assignment, checking, timing, build/package/merge, algorithm, documentation, and interface. Possibly the best thing about this text book is that while you’re taking notes in the margins, you also get the occasional laugh. For example, the textbook will detail some code from the famous and foundational video game Castle Wolfenstein and then quote the famous memoirs of Napoleon’s Valet, “…there is much in common between smugglers and policemen, the great art of a smuggler being to know how to hide, and that of the detective to know how to find.”

Chapter 7 is another favorite because it is short but gives the potential game tester a test of their own to quantify their work. The writers put it out clearly with graphics and sentences like this, “Product metrics, such as number of defects found per line of code, tell you how fit the game code is for release.”

Chapter 8 has lots of tables that go deep on the development process. Their tables show how to break your game testers into the various demographics and testing types that are done for a game. It is very complex and mixes both mechanics and marketing.

Chapter 11, on the other hand gives an overview of Test Trees, one of the more straightforward aspects of video games. How a Test Tree is used make a Dragon Age character is covered in a few pages and is great for game-makers, game testers and even game reviewers. It outlines how a player’s options are slowly winnowed down to fewer choices until an end is reached.

One of the great aspects of this book is its DVD. It has print ready graphs; great pictures and even has an outtake from the FIFA Video Game series for all football (soccer) playing fans.

As a textbook, Game Testing: All in One, is great for people who want a deep dive into the world of game testing.  It will not only give you an appreciation of this work, but it can help prepare you for this as a career.