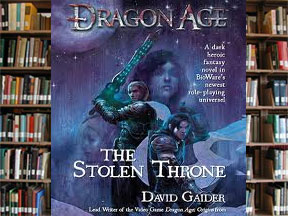 If you are missing the world of Dragon Age, but can’t wait for Dragon Age III, then The Stolen Throne by David Gaider is worth a read. David Gaider was the lead writer of the Dragon Age video game franchise and gives the back-story for Loghain Mac Tir. In the original game Loghain always came across as a capable man whose traitorous actions were for a misplaced patriotism.

In the original game Loghain is able to gain the loyalty of many nobles in his county because of his heroic past. Convincing these nobles not to follow Loghain is a hard goal that the player has to accomplish. Loghain’s short soliloqy to his daughter Anora is a game highlight. It puts the best qualities of the character within the context of the terrible choices he has made.

It’s this heroic past that concerns much of this fast paced fantasy novel. The plot revolves around Prince Maric, the son of the deposed royal Ferelden family. His fight to free his country puts him in touch with Loghain, an outlaw who becomes a reluctant ally and later a fierce friend. They both meet up with Maric’s childhood sweetheart, the warrior maid Rowan, early in the book and enlist her and her father’s help.

A love triangle grows between the three of them while they strive against their foreign oppressors. Maric, who loves Rowan as a friend, must marry her because it is expected, even though he has fallen in love with someone else. Loghain, who cannot marry her because she is a noble, loves her to distraction. Yet all of them love their country and are willing to sacrifice love to free their people.

Being set in a medieval fantasy world the battles are brutal and the politics are literally cutthroat. Just like in the game the Arls (Lords) of Ferelden spend a lot of time fighting on the field, either in the service of the alien oppressors or joining up with Maric.

Maric’s growth from a fumbling Prince to a fiery King does not disappoint. Rowan changes from an angry warrior frustrated at Maric’s shortcomings to a mature woman whose loyalties are split between two disparate men. Yet neither of these characters drive the story as much as Loghain.

Loghain starts off the story as one of the commoners who is swept up in an uncommon situation. He only has thoughts of revenge against the terrible murder of his mother by the Orlesians. Only later, after acting as a guerilla fighter, does he want his subjugated country to became a nation once again. This love of country makes for a surprise ending, one worth reading.

Dragon Age fans and fantasy lovers in general should put The Stolen Throne on top of their reading lists.