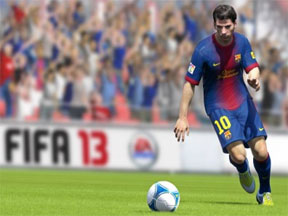 For major video game franchises, it’s easy for a development team to fall into a cycle of repetition year after year. The pitfall of rehashing a tried-and-true formula for each new game in a series often leads to stale, stagnant, unoriginal gameplay.

The sports genre in particular faces this challenge in a way that other game types don’t: sports games are as much emulation as they are creation. Their aim is to mimic as much as it is to innovate. That’s what makes FIFA such an amazing series. Each year, the development team at EA Canada somehow manages to create one brilliant improvement after another while still working within the confines of the sport it’s trying to replicate.

FIFA Soccer 13 continues the franchise’s track record of improvements, making it the best one yet. The most noticeable change in this year’s game comes from first-touch control. Essentially, a player may or may not control the ball well when he receives it. The ball can bounce anywhere, skip or even pop up into the air.

A number of factors determines if this is going to happen, including player ability, the angle of the pass and how quickly a player is moving. Put simply, it adds a sense of unpredictability to each match on a moment-to-moment basis.

As an example of how it works, I was playing as Manchester United in a match against Liverpool when Steven Gerrard received a pass, which promptly popped up right in front of him. In one fluid motion, the computer-controlled Gerrard blasted the ball into the side netting.

Extremely frustrated, I dismissed that as a fluke that could only happen in a video game. Several days later, the same exact thing happened again. It was Manchester United against Liverpool. Steven Gerrard received a pass that popped straight up at his feet and blasted the ball into the side netting. I stared at the television screen agog, partly because I couldn’t believe it happened again, but mostly because I wasn’t playing a game; I was watching a live match.

The incredible physics aren’t just limited to how a player controls the ball, though. FIFA Soccer 13 is rife with subtle, albeit significant, changes to the physics engine. Passes have a crisp zip to them, removing the instances in last year’s game which saw some balls left short. The aerial pass becomes a legitimate attacking option in FIFA 13 as well, with sharp, accurate passes often opening scoring chances.

Stringing passes together is also much more rewarding this time around. Be warned, however, that it’s also much more difficult to do so. It isn’t just a simple matter of angling the analog stick in the general direction you want a pass to go and knowing the intended player will get it. Everything from the direction a player is facing to the pace on the ball is moving helps to determine if a pass is going to hit its mark. When it doesn’t work, it usually leads to a giveaway and possible scoring opportunity for the opponent. In the few instances that each piece of the play does come together, though, the end result is among the best feelings you’ll get playing a video game.

It’s that feeling that’s going to make you want to come back to FIFA again and again. Each play feels like a game in and of itself. Each pass and movement has to be calculated, and timing is crucial, just as it is in the real game. As always, the developers have taken painstaking measures to fine tune attacking and defense to get the most true-to-life feeling possible, but they did so in an interesting way.

Instead of mitigating the effect of some attacking and defensive elements in the game, EA Canada has instead enhanced both. On one hand, it’s much easier for attacking players to take on defenders one-on-one. At the same time, the chance of taking a poor touch or misplacing a pass means defenders have a greater chance to break up a move. As a result, both attacking and defensive players have a much larger repertoire of skills and tactics at their disposal, and gamers who take the time to learn them all will find ever-evolving ways of taking on the competition.

With all of the new enhancements and tactics, FIFA 13 isn’t like any other game in the series. It’s significantly more difficult, and even veteran FIFA players will face a stiff, unforgiving learning curve as they adapt to the new changes the game brings.

The game requires a soccer brain, and for those who understand soccer tactics, you’ll find a rewarding, addictive experience. Unfortunately, and this may be the game’s only downfall, those who aren’t familiar with soccer will find the game extremely challenging, especially the higher difficulties.

Not much has been done in the way of changing the core game modes. Career mode is largely unchanged, and the Ultimate Team mode still presents a reason to keep coming back for more with its unique take on collecting players like trading cards.

The lack of change isn’t necessarily a bad thing, with each game mode displaying differing qualities of FIFA. Casual players will love collecting different players in the Ultimate Team, while others may spend hours searching for and trying to sign the right player in career mode. New skill games provide a nice distraction from the main game, and it’s possible to lose track of time entirely while attempting to achieve the highest rank.

FIFA Soccer 13 is a phenomenal game all the way around, in large part due to the fact that it doesn’t try to be something it’s not. It’s a game made by soccer fans for soccer fans. It caters to the hardcore, eat-sleep-and-breathe fanatics who religiously follow the sport. Does it run the risk of alienating some potential players? Yes, obviously. But with so much of the world comprised of die-hard soccer fanatics, an increasing number of them in the United States, EA Canada won’t be worried about losing out on any sales.

Purely from a gameplay perspective, FIFA Soccer 13 is the most polished game I’ve ever played. There’s only one way to get closer to real soccer: lace up your boots and grab a ball.