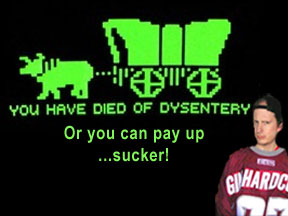 Earlier today I decided to take a break from playing the AAA titles that have come out for my Xbox 360, as well as the Dragonborn expansion for Skyrim. (Expect a review of that to come soon, by the way.) Instead, I decided to go back to playing one of the classics that I grew up with in school, or at least a modern update to said game: The Oregon Trail.

I grew up playing it on my school’s old Apple II computer, and it was just so much fun. Whoever thought that an edutainment title could actually be enjoyable as well as informative? It was even my first experience at learning what dysentery is, though I would never wish that on my worst enemy. (Who am I kidding, you know darn well I would.) But times have changed, and I have been playing the modern version for the Android platform.

I have played the Android version several times before, and aside from some touch and motion based mini games, it felt like I was playing the original game. That is, until recently, when it received an update and changed the game entirely.

For some reason, Gameloft, the current publishers of Oregon Trail as well as many other mobile based games, decided to add a real money currency system. Yes folks, that meant even for a game that is nearly 40 years old, they decided to find a way to force players to pay real life money to finish. Sure, it still has in-game currency in the form of gold coins, but you run out of that way too soon, even if playing as a banker, and that doesn’t help when you are going from checkpoint to checkpoint and this happens:

Maya has a broken arm…20 coins to heal or buy a splint.

Jack has a broken leg…20 coins to heal or buy a stretcher.

Maya has typhoid…20 coins to heal or buy chicken broth.

Lucy has measles…20 coins to heal or buy shaman herbs.

Maya has dysentery…20 coins to heal or buy Dr. Johnson’s Elixir…wait I don’t have any more coins?

Maya has died. Good riddance! I hate you Maya!

Are you kidding me? I never had to do this in high school, and now I have to for real? But it seems that The Oregon Trail isn’t the only game doing this. All the games I’m playing are following suit.

A few months ago I mentioned in an episode of The GiN Lounge about those who can be hired to ‘power level’ your character. What that means is that someone plays the game for you until you reach a certain level, and you pay them for it. In game purchases is taking this to a whole new level. Rather than work your way to getting a certain level or to obtain that rare magical item, you can now pay for it with real money. Last night I played Forza Horizon and needed to get a new car that costs 1.3 million credits. I was about 500,000 short, but I was given the option to buy the car for 5 tokens, using money from my wallet. Forget that! I’ll just work my way up to the credit total.

Whatever happened to the days of working your way up to something? Now it’s just whoever wants to waste the most money wins. This all started in MMOs with the previously mentioned power leveling, then it was the in-game purchases. It’s getting out of hand, but it’ much worse on the games that are now so-called ‘Fee to play.’ Sure you are playing the game for free, but you are at a severe disadvantage.

I’ve always felt like a fish out of water when it came to MMOs because everyone else was far more powerful than I was, and that was because they play for hours on end with what appears to be no outside life at all. Imagine how it would be when I cannot afford to pay for level boosting, if I really wanted to, when I have more important matters such as bills, rent, food, and clothing to worry about.

In the movie Chasing Ghosts, Billy Mitchell said "somebody tells me today, they got a high score in a game, I say, yeah, how much did it cost you?" I never thought I’d ever see the day I’d agree with him, but it’s definitely true. And for the rest of us who are fighting and scrapping our way to a victory, it’s not fair at all.