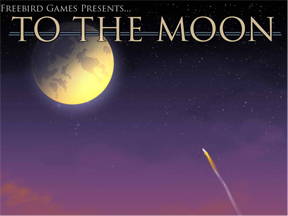 This week I have a jewel to share with you should you be unfortunate enough to not have heard of this game already. The gem to which I refer is called To The Moon, a game that has been acclaimed as excellent, not because of amazing gameplay, but because of a wonderful story. And where as normally I would be skeptical about such a game, this one had me intrigued enough to look into it.

To The Moon is a game based around two doctors who have a technology that can create memories based off of a patient’s real ones, turning these fake memories into the real thing (or at least these memories are what will now be real to the patient). With this tech, they go into a person’s mind and attempt to fulfill the wish a dying person by making them believe that they lived life achieving their final desire.

To be more specific though, To The Moon focuses around a dying man named Johnny Wyles, whose final wish before he dies is to go to the moon. The player then takes control of Dr. Watts and Dr. Rosalene as they attempt to alter his memories so that he may die believing he accomplished just that; all the while traversing farther back into Johnny’s past seeing the life he lived, the trials he suffered through, and everything that he and his deceased wife, River, had dealt with.

With just the synopsis I could already guess that his game had a story that was likely going to be inevitably sad, and it proved to be just that. Don’t get put off just because I say this is a sad tale though, because it has a happy (and I use that term loosely for reasons you’d have to play to find out why) ending I firmly believe that every game maker who wants to have a story in their game needs to take several pages out of To The Moon’s book. I love a game that has a good story behind it, and To The Moon is easily one of the best I’ve ever seen. Honestly, I don’t think I’ve ever had a game pull at my heart strings as hard as this one did. The only one that even comes close is the third episode of the Walking Dead game, and even then To The Moon beats it.

I’ll admit that I shed a few tears once or twice during the playing of this game just because of how well the story was written; it knew exactly when and where to add the most trivial of things only to make them so extremely important once you find out their significance. It created a tragic atmosphere for you to fix, only to question your end goal. But most importantly, it made you curious to move on, sad because you care for the characters, happy when it gives you those needed pick-me-ups, and shock just when you thought things couldn’t get any worse. The story really is everything it was promised to be.

As a game though, there is more to it than just story, even though the story really is the meat of this particular title. To The Moon’s gameplay is limited to say the least, and after the repetition of simple searches and small puzzles, I found myself bored of them with only the interest of the story driving me onward. The best way I can describe it is by saying that the gameplay is more or less a compilation of a small amount of minigames. They’re not hard, but are there so that you’re not stuck just reading a story the entire time.

Despite the limited gameplay though, the game itself is still well done at its core. The music of To The Moon is beautiful as are its sprite based graphics (they look like the SNES graphics, so maybe I’m a little biased), and the gameplay mechanics are smooth. It does well to create the needed atmosphere and does a perfect job (in my opinion) of making up for its lack of gameplay with its storyline. I wouldn’t have sat down and played it from beginning to end without stopping had it not.

The only real problem I could find with To The Moon is its lack of replay value. The game is like a book: you read it once and you’re done with it, at least for a long while. There are no alternative endings, no drive to get a better score on those minigames, and no reason to go back in unless you want to ‘read’ it again. But as with any good book, you really want to share its amazing story with everyone you know, and that’s why this game gets an almost perfect score from me.