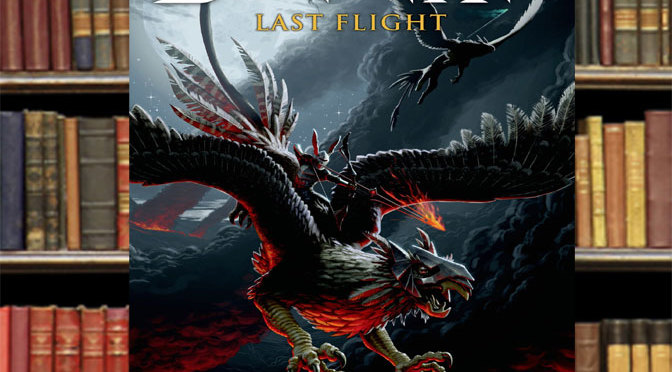 The latest Dragon Age novel gives background for the release of BioWare’s new Dragon Age: Inquisitions game and concerns the Grey Wardens. In it we go all the way back to the fourth Blight, the one that occurred hundred of years before the first video game Dragon Age: Origins. It answers what happened to the griffins which the Grey Warden’s used to ride and how they died out before the start of the video game franchise.

This is not a stand-alone novel. If you are a fan and want a little more insight into the land of Thedas, buy it. If you just hunger for more of that particular fantasy world, get it. If you just like fantasy novels but have never played Dragon Age you will need to Wikipedia some information because it doesn’t give you extensive background or back-story before the action starts.

Liane Merciel , the author, has written her own original fantasy books like The River Kings’ Road and Heaven’s Needle. She has also penned other game related books for Pathfinder. Her fiction does not shy away from bloody descriptions and most of her writing places characters in some kind of war. Merciel’s description of the darkspawn and how they affect the griffins can be gruesome.

This book has a complex structure that jumps back and forth between two different narrators. These narrators are both eleven mages who work for the Grey Warden’s. One narrator is the legendary elven griffin rider Issenya, who left behind a secret journal that the second narrator Valya finds in a hidden alcove.

Issenya follows in the tradition of other BioWare strong and complex female characters. She does not ride her legendary eagle-lion beast against warped creatures out of a simple desire for duty but because of multiple factors. Her heroic actions are never simple choices of charge or retreat but of saving the most people with the least amount of casualties. She is also beset by making the better of two bad choices.

She is paired with her twin brother Garahel, who is known as the hero of the Fourth Blight. Garahel’s struggle to maintain alliances, lead others into battle and stay hopeful is well portrayed. Since Garahel’s part in history is well known, Valya finding Issenya’s journal is sort of a revealed secret history.

This secret history shows how certain heretofore-unknown actions by Issenya both saved the world and doomed the griffins. Valya’s narration, set in the present, parallels the past struggle. Valya is looking for some insight into how to combat the present problem the Grey Wardens are facing. What she discovers could bring hope to her world.

Valya is not just dealing with darkspawn but with an internal conflict between mages and those that used to control them, the Templars. Being a mage herself she resents the Templars but understands the danger of magic in the world of Thedas. This struggle was started at the end of Dragonage II and will be a major part of Dragonage: Inquisitions.

The great part of this novel is that is sets the stage for the game. The bad part of the book is that it must dramatize a past story that we all know the outcome to. Both Valya and the reader know that the Blight was overcome. Merciel does a good job of making us care for the characters in the past but we know they will be successful, so we can only worry so much.