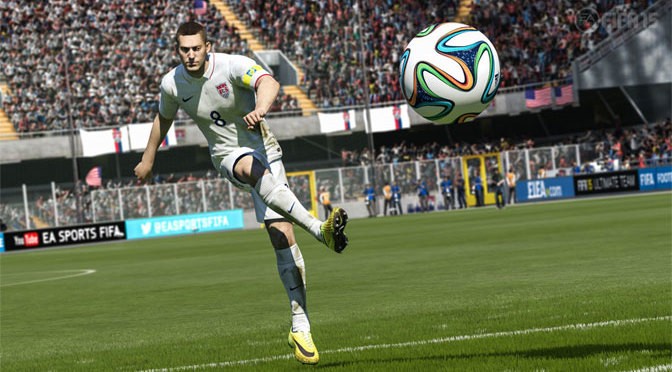 The FIFA franchise has become an anomaly in the gaming world. Year after year, the development team at EA Canada comes up with a game that could, understandably, become a repetitive rehashing of the prior year’s version. Yet since the reinvention of the series that started with FIFA 08, the developers have delivered an improved experience yearly. Every year that I review FIFA, I’m left astonished at the subtle changes and nuanced adjustments made to the physics engine. On their own, each change would barely be noticeable, but collectively, the enhancements bring the franchise to new heights with every release.

It’s for this reason that FIFA 15 is such a letdown. Make no mistake: It’s still a great game. But in comparison to last year’s version, FIFA 15 doesn’t hit the stellar heights where its predecessor set the bar. For the first time in years, the developers tweaked the physics engine in a way that offers up as much frustration as it does great play. When it works, FIFA 15’s brilliance radiates through crisp ball movement, sharp passing and gorgeous goals. When it’s not working, however, the game delivers one frustration after another.

Take, for instance, the fact that players now have a “randomized” element to their play. As a way to mirror the unexpected nature of a real match, players are more likely to make a mistake in high-pressure situations. They may fail to control a pass, play a ball off target or skew a strike on goal unexpectedly.

While that may add to the realism, the game tends to apply this “randomness” a bit too frequently. There seems to be a constant trend that sees players slip as they quickly change directions, making a motion more similar to a speed skater taking a corner than a footballer executing a sudden cut. This happening once or twice wouldn’t be all that unrealistic or cumbersome, but every quick turn seems to have an unnaturally high chance of triggering the animation.

Compounding the footing issues, players also seem to have added weight in FIFA 15. Changing direction at speed feels more like riding a bicycle than sprinting in $250 precision-molded boots, with every turn taking players wider and farther than is necessary or realistic. It’s not hugely off the mark, but in a series that’s prided itself on getting all the minute details right, it’s a notable issue.

The momentum hiccup becomes even more pronounced while trying to play containment defense. Holding down the button to contain is supposed to result in your defender falling into stride with an attacking player. More often than not, however, this year’s FIFA sees the defender immediately begin sprinting, causing him to over-commit and concede unnecessary space to the man on the ball.

Issues with defending aside, there is one area where the physics engine finally hit the mark dead on, and it’s been one of the only flaws in FIFA for many years. Goalkeepers are finally competent. Whether they’re flying through the air to make a stellar save or just making their presence known in general, the keeper AI has received a much needed enhancement.

With the desire to constantly improve the physics engine, the adjustments EA Canada made to the overall gameplay are understandable, and the fact that they don’t hit the bull’s-eye in all respects can be forgiven.

The changes to FIFA’s presentation can’t.

FIFA 15 is a stunning game to watch – and that’s precisely the problem. In an effort to make each match look and feel like a live broadcast, the developers have incorporated off-the-ball cutscenes of a sort. When the ball goes out for a corner kick, the camera pans to a low-angle close-up of the player running over to the corner, grabbing the ball and gesturing towards his teammates in the box. In a key moment of the match, this would make sense and add to the game’s tense atmosphere. But every single time is ridiculous, and I actually found myself pounding the “A” button on my Xbox One controller repeatedly in an attempt to skip the animation.

In a similar way, when the ball goes out for a throw-in, a small animation often occurs with the throw taker trotting over, possibly flicking the ball up into his hands and just generally taking his merry old time.

The problem isn’t that these animations aren’t appropriate or don’t look good; they look fantastic. It’s the fact that they’re just that: animations. And the fact that they happen so frequently is extremely frustrating. If I wanted to watch a match on TV, I’d go watch a match on TV. The point of playing FIFA is to interact with the game and be a part of the action, not to watch and admire the game.

Going along with the visuals, FIFA 15 sounds great, with impressive commentary and the series’ expected excellence in its soundtrack. It really makes the game a spectacle, and the ambiance of every match is palpable. It’s just ironic that the developers actually made the presentation a little too good.

FIFA 15 injects some great ideas into the series but doesn’t quite pull them off. With the triumph that FIFA 14 was still fresh in the mind, it’s virtually impossible to ignore FIFA 15’s flaws, minor as they may be.