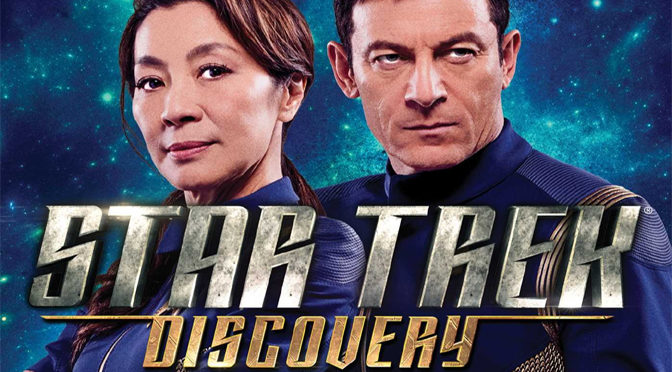 Drastic Measures takes characters from of the new Star Trek series “Discovery,” Gabriel Lorca and Philippa Georgiou, and mixes them with characters from the original series. A teenage James Kirk appears along with a complex villain from the series first season, “Kodos the Executioner.”  The book is a prequel to the new series and gives some background into Gabriel Lorca and Philippa Georgiou before their promotions.

Star Trek: Discovery does not move the franchise into the future beyond Star Trek: Voyager. Like the show before it, Star Trek: Enterprise, it mines the past. “Discovery” is set roughly a decade before Captain Kirk and crew set off on their five-year mission and this novel is some years before that. 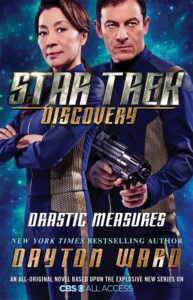 What makes Kodos the Executioner such a great character to base this book on is that in the original series, Captain Kirk is called to a planet to see a disfigured friend of his who believes he has found a man, Kodos, who ordered the execution of over four thousand people, an execution that he barely escaped himself twenty years earlier. Captain Kirk complicates this by keeping his investigation secret from his own crew.

This Kodos lived on a planet, Tarsus IV, which had a terrible food contagion. This contagion had destroyed much of the planet’s food supplies and so Kodos organized a bloodless coup to replace the current governor with himself. All information up to that point said that no Federation Ships could arrive in time to stop starvation. So Kodos convinced a small group of his inner circle to execute four thousand men, women and children so as to stretch out the remaining food sources. This horrific crime was compounded by Federation ships being able to arrive much sooner than anticipated, making his evil rationale unnecessary.

[amazon asin=1501171747&text=Boldly go into the Desperate Measures story with a copy of the new novel from Amazon!]

Much of the story of Drastic Measures revolves around Gabriel Lorca, a Federation officer assigned to Tarsus IV, fighting against Kodos as the executions occur and then hunting Kodos and his henchman down. Philippa Georgiou comes into the plot as part of the rescue ships from the Federation. James Kirk makes a brief appearance as a teenager who was growing up on Tarsus IV when the horrible events happen.

The utopian vision of Starfleet takes a bit of a beating in this book. How can an overarching government, despite its best intentions, not make mistakes when it comes to terra-forming, diseases and taking care of colonies? Some of the contagion, the misinformation about when help can arrive, and other missteps, all unforeseen, still set the stage for the arrival of a military despot like Kodos.

The book goes into some of the psychology and politics of what could cause such a massacre. Sadly, there is a lot of human history to draw from for this story. The Holocaust, the Irish Potato Famine, the Rwandan genocide and many other horrific events fit this story.

If you are interested in the new series and like the characters of Gabriel Lorca (played by Jason Isaacs) and Philippa Georgiou (played by Michelle Yeou) this novel is a great fit for you. It has great pacing, an engaging story and doesn’t stop until the end.