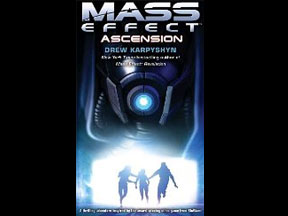 The same mature themes present in the Mass Effect games are evident in Mass Effect: Ascension, the second Drew Karpyshyn novel set in Mass Effect’s futuristic universe. The book characters must decide between the Illusive Man’s ruthless actions that could save many by sacrificing a few, or the noble actions of Kahlee Sanders that could save one person but endanger the future of humanity. The one person who typifies this choice is the Cerberus operative Paul Grayson.

An assassin for the underground organization Cerberus, Grayson is shown as a flawed human being that still possess some good qualities. The Illusive Man, as head of Cerberus, uses Grayson’s loyalty to become the parent for a mysterious child who possesses strong psychic powers. This child is seen as a potential weapon to save humanity against the coming invasion of the mysterious alien Reapers.

Grayson’s constant choosing between his adopted child’s best interest and the Cerberus agenda of creating a living weapon push him to self-destructive behavior. Again, this book is not shy about portraying violence, drug use and romantic relationships that are built on lies. Yet, Grayson’s attempts at doing the right thing in spite of the Illusive Man’s manipulations make for an entertaining read.

For fans of Mass Effect, the portrayal of the Illusive Man and the Cerberus organization make this novel worth buying. Written in third person omniscient, the reader actually gets into the head of the mysterious mastermind. You see why Martin Sheen says the character he plays believes that the end justifies the means.

The timeline is set after the first game, and of course after the first novel. Kahlee Sanders is no longer with the alliance but is instead working at a school to help children who can use the telekinetic powers called biotics. Kahlee is older now and doesn’t take a back seat to the other characters like she did in the first novel. Instead of being rescued, she does the rescuing.

I read it on my Kindle and found myself clicking forward to the next chapters as fast as I could. Most important, the book can stand alone, without the reader having played the game or read the first novel. I can say that, because I actually read these books before playing the game. So if you like a good space yarn that is more Babylon 5 than Buck Rogers, read it.