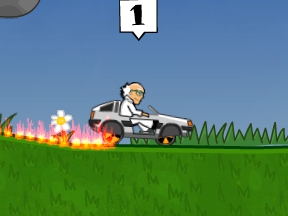 Well, my fellow Time Wasters we are hitting a hard part of the year for casual gaming. That’s right, the fall blockbusters are coming out. With titles like Batman: Arkham City and Battlefield 3 hitting shelves in the last couple of weeks (can’t forget Gears 3 either) it only makes sense that we will start to see a decline in good casual games. The majority of game developers are also gamers as well and unlike big corporation developers those who design a lot of these small type games work on their own schedule. Still I’ve scraped around and found us something to play.

Cyclomaniacs 2 take this one step further by making the game a full blown racer. There are nine other competitors in every racer and the majority of the time they have better stats than we do. It sounds unfair but the AI is a lot more prone to mistakes than a human player so it works out pretty well.

Along with trying to come in a certain place each race also has a secondary goal. This can be finishing the race in a certain amount of time or performing so many tricks before you reach the end. Completing these extra challenges mostly unlock additional characters to race as. One of the best racers in my opinion was Doctor Scott Great, who drives a Delorean powered by 1.21 gigawatts of electricity.

The game also contains five or six minigames that can be played as well. Each of these games are fairly easy and the only real reward is an extra character so I can’t really say they add much to the game.

I found it strange that such a simple concept as this game was able to keep me entertained for so long. I guess it’s because I was reminded of Uniracers. For those who know what I’m talking about, you’re awesome. Those who never had the chance to play Uniracers missed out. The game came out for the SNES and was a simple game of hold this direction to move your Unicycle in that direction. There wasn’t much complex about it and when played by yourself it wasn’t all that grand. The real fun came from having a friend to play the game with.

I guess this is another problem I had with Cyclomaniacs, there wasn’t any kind of multiplayer in the game. I think it would have been great if there was an actual across the internet form of multiplayer but heck I would have accepted controls for two people on one keyboard. Sure it would’ve been a little cramped but isn’t that part of what made gaming back in the day awesome?

As for the graphics and sound in the game, well, they are both there. Neither is so extraordinary that they stuck out but then again without them we wouldn’t have a much of a game now would we?

All in all Cyclomaniacs isn’t a bad way to waste your time. Somehow it caught me in its mindless gameplay and I hope that you’ll find it just as entertaining as I did if not more.

Cyclomaniacs wins 2.5 GiN Gems out of 5.