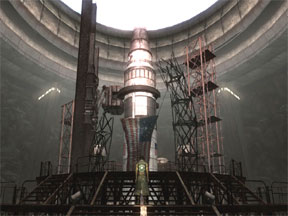 Playing Fallout New Vegas over the past year, I’ve come to see the main storyline and the tales told through the downloaded content packs (DLC) as two separate entities. Really, if this were anyone else other than the team of Bethesda and Obsidian, the plot and gameplay found in the four DLCs would be more than enough to be a separate game all their own.

While each of the four DLCs can stand on their own, they are really tied together to form a complete storyline. Throughout the course of the four adventures, we learn a lot about our nemesis Ulysses, a rival courier who walked the roads to the East with Caesar’s Legions over the years we were walking the ones in the West for the NCR. And we learn a lot about ourselves. Let’s not forget that we began our adventure in a shallow grave with a bullet in our brain. Perhaps that’s why we can’t remember much from before, and why we need Ulysses to remind us of our triumphs and crimes.

Throughout the three previous DLC’s we found out about Ulysses. And in the main game we find out that someone else was originally supposed to be Courier 6, the man carrying the platinum chip. That was him. He gave up the job when he found out you were next in line, but we never really knew why. Finally in the third DLC pack, Old World Blues, we got to hear his voice in a series of tapes left behind in the abandoned labs of Big Mountain. It was pretty clear that Ulysses is obsessed with us, though we don’t really know why.

The adventure beings like most DLCs, with a message, this time from Ulysses, asking you to come to the canyon wreckage, to a place called The Divide, where he promises to answer all your questions. Like the previous DLCs, you can’t take any companions along with you and you can’t have finished the game. So you will need a save sometime before the game ends. You don’t have to have played the previous DLCs, but I would HIGHLY RECOMMEND that you do. Otherwise, all the subtle plot points and revelations made might not make too much sense.

Whereas Dead Money was all about adding a little bit of a horror aspect to the Fallout World and Honest Hearts was a wilderness adventure, Old World Blues was kind of a humorous take on the wasteland. Lonesome Road is all about story telling. The gameplay itself is more or less traditional. You will be fighting in urban and suburban environments and inside some underground places, even high on a freeway overpass at one point. Your goal is to get from one end of The Divide to the other, and let’s hope you have your walking shoes ready, because it’s a big place.

You will quickly discover that The Divide is a very American place. It was a series of towns setup around nuclear silos. More so than any other place in the wasteland, you will feel like you are walking through the remains of the old United States.

Your chief enemy here will be NCR and Legion ghouls. Apparently both sides tried to reach out to the people of The Divide, and got caught up in a nuclear exchange. As such, there are two different types of ghouls, the NCR and the Legion ones. They act pretty much like their normal, fully-living counterparts. Legion ghouls will come right up into your face, though they have some snipers, and the NCR ones will take up fortified positions protected by traps and mines, and try to bring you down with long range firepower, though a few can fight close up too.

There is also a new type of creature called a tunneler who lives there. These reminded me of the sleestak from Land of the Lost. They are tough little buggers too and tend to swarm you. They have a lot of hit points but no armor, so hollow point ammo is a must. You are issued a new type of weapon, the flash bang grenade, to deal with them so long as you loot a dead NCR patrol and read why the grenades are important. Against a normal person they can blind them for a time, but against tunnelers who are not used to light, they cause them to frenzy. It’s nice when you can get the pack tearing each other apart, but not all that easy to accomplish. Instead, I used Christine’s silenced sniper rifle from the Old World Blues DLC with HP ammo loaded, some form of night vision, and stealth boys to infiltrate their layers and take them out.

There are also death claws, which tend to fight the tunnelers, and you too. They are kind of the opposite of the tunnelers as you probably know. They are huge, mostly traveling alone or in pairs, with good hit points and some of the best armor in the game.

Along the way as you walk through abandoned military bases, car tunnels, collapsed skyscrapers where it’s hard to tell the floor from the ceiling at times, you will sometimes be confronted by Ulysses, who speaks through an ED-E robot you find near the beginning of the road. He tells you the history of The Divide, what role you had in helping the people there (which happened before the main game began) and also what role you played in the destruction of that same place.

Finally, you also learn the history of ED-E, which was a little charming addition to the DLC’s storyline. Remember all those RALPHIE posters you saw around the wasteland? Well, they are all part of the incredible story of ED-E. You can also improve ED-E in the DLC, giving him new abilities like being able to repair your weapon once per day, adding damage reduction to him and yourself while he’s in your party, and bonuses to energy weapon damage. The five ED-E related perks you can earn in The Divide are transferred back to your personal ED-E (who is actually the original model) when you leave the DLC.

There are several unique weapons inside The Divide, most with American themes. Heavy weapon lovers will enjoy the Red Glare rocket launcher, a very high-tech launcher with three add-ons you can purchase to improve the damage and accuracy so that it becomes the best launcher in the game. There is also a shoulder-mounted machine gun which can turn your character into a torrent of destruction.

For defense, there is US combat armor and the rare riot-gear helmet featured on the title screen of the game with the red glass lenses. That helmet is awesome and gives you a type of night vision that automatically activates when you crouch down in dark places or at night. Called Sneak Sight, it made that helmet one of the best in the game. And the four points of armor it offers is nothing to sneeze at either. Plus, unlike night vision, Sneak Sight won’t activate in the middle of the day, so you’ll never be blinded by it. The helmet quickly became my favorite item in the game.

The DCL ends with one of the most epic battles of the entire series. Of course you get to meet Ulysses, but if you’re gifted in speaking skills and choose the right things to say, you can actually make him see the error of his ways. Instead of hating you, he comes to really admire you. Either way, a huge battle will ensue that can last for about ten minutes. With Ulysses on your side the battle is much easier, but either way it’s going to be a fun challenge. I used, ironically enough, my all-American rifle and must have racked up over 30 headshots in that last protracted fight. I reloaded and played it through a couple times because it was so much fun.

At the very end, you have the ability to really affect the main game too, and tip the balance of power to one side or the other, if you choose. Depending on what you do, you can also open up one extra zone to explore once the DLC is over, plus another one that is opened for everyone if you don’t mind following a nuclear missile to its destination. That final after-DLC zone is mostly a treasure hunt, but also has some intense combat.

Ulysses will leave you a final message whether or not he lives or dies, plus some nice gear depending on your character build. That final message is his advice to you, and it’s poignant and deep, just like your nemesis-perhaps-turned-friend. I don’t mind saying that I felt more satisfied with the ending to the DLC chapters than I did with the main game. Never before have I experienced such a quality set of DLC adventures with an interwoven storyline. My hope is that not only Skyrim, but all games in the future, can use the DLC model found here to make their content more interesting. All the DLCs for Fallout New Vegas, but especially Lonesome Road, added a huge amount of content for a very reasonable price. I may even have to play though the game one more time with all the DLCs pre-loaded this time. They are that good that you will be back for more.

All good things come to an end, but not everything ends with such a bang. Lonesome Road is a great DLC, and a perfect ending to a wonderful story.