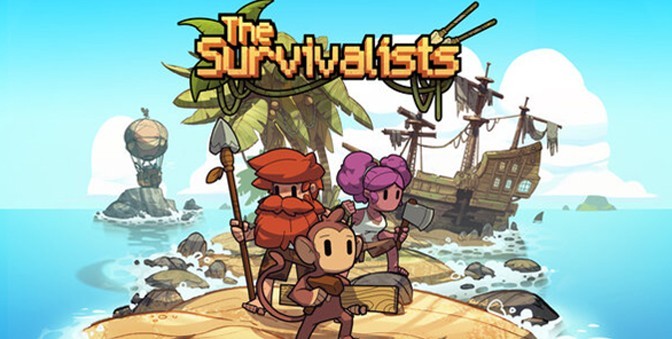 Team17 is launching its message in a bottle today and announcing the release of The Survivalists, part of the critically acclaimed The Escapists universe, which is available now on Nintendo Switch, Xbox One, PlayStation 4, and Steam, and exclusively to mobile via Apple Arcade. The Survivalists takes players to their very own procedurally-generated islands, where they can explore, craft, and train troupes of monkeys in order to survive against the harsh environments, savage beasts, and orclings, as well as explore dangerous labyrinths and avoid deadly traps, in up to four-player, online cooperative multiplayer.

Shipwrecked life in The Survivalists is helped through its unique Monkey Mimic system, where players train up to 20 local primates to do a raft of tasks and help automate systems, from cooking and crafting to collecting resources. Tasks can be chained together like a production line, so monkeys help make island life run a little smoother.

Key Features:
• Play together and survive: Up to four players can join forces to explore the world of The Survivalists, helping each other out to stay alive
• Get crafty and be inventive: Various items great and small can be crafted, from weapons to tools and buildings to keep your crew sheltered
• Automate with monkeys: Enlist the help of monkeys for a number of tasks, including protecting your group and gathering resources
• Curiosity is rewarded: Players are encouraged to explore their surroundings, where they’ll encounter dangerous wildlife, mythical enemies, and tantalising secrets.

Emma Bates, Producer, Team17, said:
“Ever since the success of The Escapists, we’ve been excited to create a new, different game in the same universe, and so The Survivalists was born. We can’t wait for players to shipwreck themselves on their very own island, as they start their new life surrounded by their monkey pals, uncovering all of the secrets, and danger, their island has to offer!”

Max Everingham, Head of Publishing, Team17, said:
“The Survivalists is a very special title to everyone here at Team17, the fact it was developed in-house means we are extra proud of the next entry in The Escapists universe. We hope players enjoy their shipwrecked island life, and that with a little help from their monkey friends, they manage to not just survive, but thrive in the unchartered world of The Survivalists.”

The Survivalists is now available digitally on Nintendo Switch, PlayStation 4, Xbox One, and Steam for $24.99.