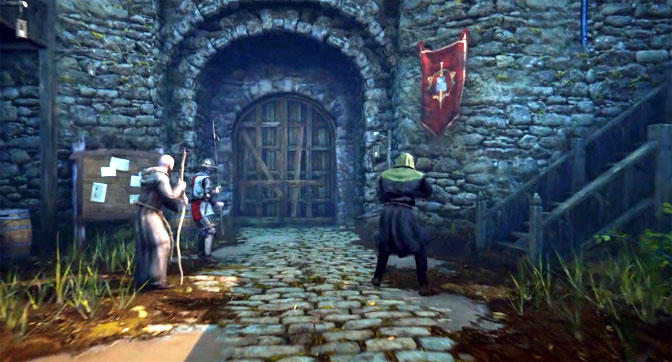 Craft supplies and manage resources by day, scavenge throughout the fallen city by night. You’ll face hunger, injury, disease, and despair – as well as the growing tensions between civilians and the city’s last defenders. The soldiers won’t hold for long without your support, and if their defense fails, the invaders will have no mercy. But remember, rescue is already on its way.

The Midlanders, proud of their lands of plenty, await the upcoming days with dread. Just before harvest season, dozens of drakkars arrived on the shores of Midland, bringing hordes of raiders from the frosty North – the Ismirs.

The raiders have devastated the land – plundering supplies, burning villages, and leaving a trail of peasant blood in their wake. Surviving civilians have hidden behind city walls in hopes of being saved by armed troops. When the invaders reached the gates, the ruling lord battled them in an open field to protect his people. Even though he and all his men perished, one messenger managed to cut through the enemy lines to find help.

The fate of this land is now in your hands. Can you support the castle’s last defenders long enough to wait for rescue?

Gloria Victis: Siege – a survival resource management game in the style of This War of Mine, set in the medieval world of Gloria Victis. is still in development, and its PC release date will be announced shortly. The game will be localized in English, Polish, Chinese, Russian, and Turkish.