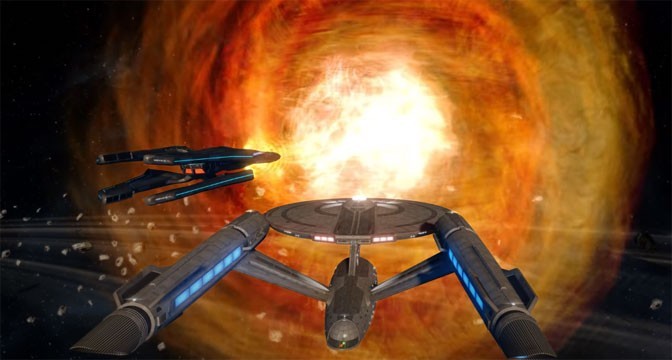 Starting today, Star Trek Online Captains can download the game’s latest story update, Reflections, on PlayStation or Xbox consoles. This new update for the free-to-play MMORPG reintroduces a long time fan-favorite – the widely feared Admiral Leeta (voiced by Star Trek: Deep Space Nine cast member and STO alum Chase Masterson). Once considered an adversary, this Bajoran leader of the Terran Empire has traveled from the far reaches of the Mirror Universe to warn The Federation and its allies of an impending threat. This all takes place in a new featured episode, which kicks off a brand new, multi-part story arc featuring the Terran Emperor, whose identity has yet to be revealed.

With the release of Reflections on PlayStation and Xbox platforms, players can also participate in an exciting new ground TFO, where they invade the mirror version of Earth Space Dock, and other challenges to earn rewards, including the new T6 Mirror Gagarin-class Warship.

Star Trek Online is a free-to-play massively multiplayer online game that allows players to explore the Star Trek universe from within. Players can forge their own destiny as Captain of a Federation starship, champion the Empire through the far reaches of the galaxy as a Klingon Warrior, rebuild the Romulan legacy as the commander of a Romulan Republic Warbird or carry out daring missions on behalf of the Dominion as a Jem’Hadar soldier. Captains can also explore iconic locations from the Star Trek universe, make contact with new alien species and battle alongside other players in customizable starships. Star Trek Online is currently available on PC, as well as PlayStation and Xbox consoles.