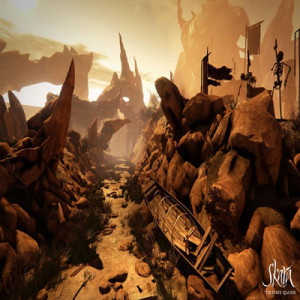 Epic will host one of the first titles to develop using their powerful new Unreal Engine 4 at this year’s Develop Conference in Brighton. SKARA—The Blade Remains, a third-person multiplayer versus title, will be showing off its alpha build inside the Epic booth space today and tomorrow.

“Everyone who has seen Skara has been impressed by the quality of the graphics and the beautiful environments we have created”, explains Pablo Rodriguez – Skara’s Creative Director. “We are excited about what we are able to create with the new tools and how quickly we can create them.”

“We’re a small team on a shoe-string budget and yet we are building a AAA quality game”, says Cesar Ortega – Skara’s Commercial Director. “We’ve gone so far thanks to Unreal Engine 4 and Epic’s faith in Indie developers by making this great engine available to us.”

The dream behind Skara brought together a team of both experienced and junior developers from all over Europe. In just 10 months the Indie team has a playable game, which visitors to Epic’s booth can try out for themselves for the next couple of days — and see how long they can stay alive in its intensely violent world.

“We’re looking forward to watching players try out the combos and the fatalities” says Pablo. “Only a handful of people have played it so far!”

Skara, which got its Greenlight from Steam in just 8 days and recently completed a successful Kickstarter campaign, will be releasing its Alpha version through Steam Early Access at the end of August. Players that are interested can play it online by signing up on the game’s  website.  The full, free-to-play release is anticipated by year end.