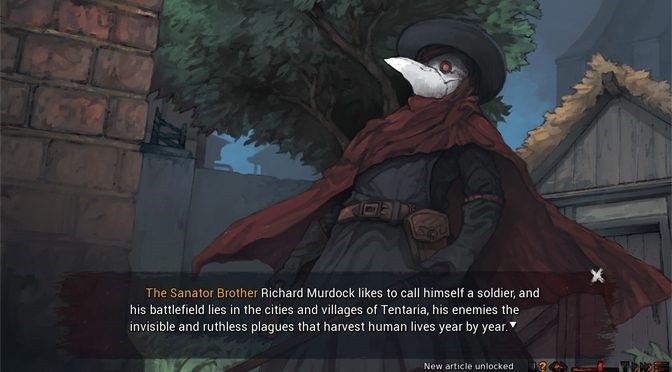 Serafim Onishenko, a book author and experienced narrative designer, announces the release of the demo of his indie game — Sanator: Scarlet Scarf.

This niche, narrative-based project in the dark fantasy genre is intended to fill the void in the market of videogames heavily focused on storytelling, according to its developers.

“Our goal is to create original games for those who appreciate atmosphere a little more than gameplay mechanics.” ― Ignis Sanat manifesto.

Scarlet Scarf is a visual novel inspired by the legend of Plague Maiden. Dive into the dark mysteries of a dying city with the fate of Sanator Richard Murdock in your hands.
Perhaps it’s not too late to stop the on-going calamity…

This world has fallen twice, and its future is happening on the ruins of a forgotten past. On the ashes of megacities, new powers rise with only one goal: to discover how much they’ve lost.

Every day is an endless battle, but death is not the worst possibility for the loser. Нere, everyone is looking for answers, but they only find new questions. And the lucky few who still gain knowledge…

You wouldn’t want to be in their shoes.

“In order to find proper images and illustrate the game, I had to look into the darkest corners of my soul. The people who saw me working at the time often asked if I was alright.” ―Ingvar Skeie, lead artist