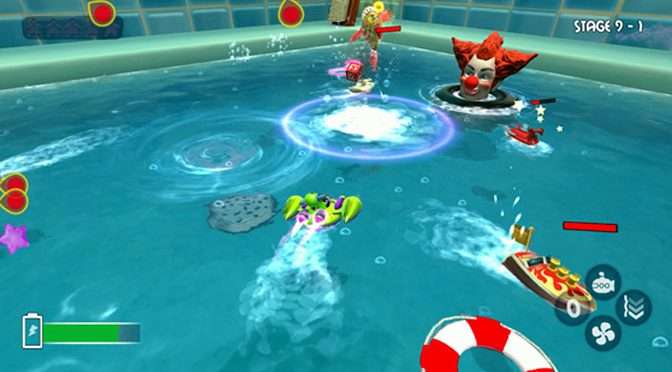 Indie developer Smash House Games today announced that the studio’s arcade title Smash Boats – which sports a very particular brand of boat-on-boat combat – has been updated with an all-new couch co-op mode for up to 4 players on Nintendo Switch, along with three new party games.

Xbox consoles are getting their very own Smash Boats port as well. The appropriately named Smash Boats: Waterlogged Edition – also launching today – allows gamers who own an Xbox One/Series S/Series X console to enter the same unsanitary arenas found in the Nintendo Switch version …. which may or may not include brown logs of known origin among other “hazards.”

Smash Boats is an action game with a seemingly simple goal: Smash everything in sight to conquer all! Sounds easy – but with relentless enemies, zany Mayday events, and unusual water hazards that can hinder your progress … it’s anything but, really. We’re talking about arcade-style difficulty in a glorious, colorful package filled to the gills with boats, special moves, wacky events, obstacles, and more. If you end up having trouble completing some stages on the Nintendo Switch, just have a friend join you for couch co-op! More than two? Party games – all 3 of them, all new – support up to 4 players.

“My father developed games for the old Atari and Commodore computers, Intellivision, and PC – so you could say that I’m a second-generation game developer. I started my career at Midway Games – where I did everything from UX design and development to gameplay and AI programming – but my goal was always to create my own IP. The end result is Smash Boats, which I created with a group of friends. I hope players on both Xbox and Nintendo Switch have as much fun in the arenas as we had building them!” – Jeff Johnson, CEO, Smash House Games