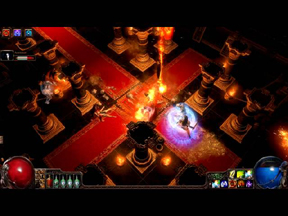 Grinding Gear Games has created an exclusive new helmet skin call the Angelic Mask specifically for this charity event. The mask will cost $5.00 and only be available during the two week event with 100% of the proceeds being donated directly to the Child’s Play charity.

Participants during the event will be able to win great in-game prizes such as special micro-transactions as well as signed art from Path of Exile. Additionally, Grinding Gear Game’s partners such as NVIDIA and Razer have contributed an awesome array of keyboards, mice and graphic cards that will also be awarded to participants.  Grinding Gear Games will pick winners randomly from the participants whose characters reach the following levels or higher. Participants can win prizes from multiple tiers as their characters level up.