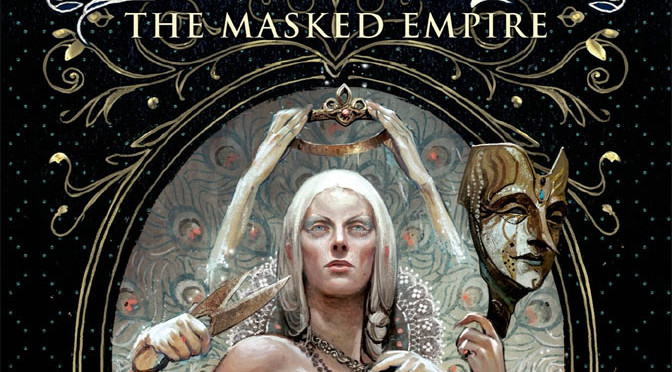 [amazon template=add to cart&chan=default&asin=0765331187]The best video game franchises don’t just put out a short YouTube video and a few posters at the local game store. They actually get you involved in the story by starting the story before you even get the game. The new novel, Dragon Age: The Masked Empire, from BioWare senior writer Patrick Weekes sets the stage for the video game, Dragon Age: Inquisition, by giving you some of the back-story.

This novel is set in the heretofore-unseen Orlais; a kingdom obviously based on late medieval France but with a stratified aristocratic culture founded on elaborate scheming called, “the Grand Game.” Bards, freelance spy-assassins, that work undercover as wandering minstrels, are the agents of the Olesian nobles in this deadly “game.” This is why the main character in the novel is a bard-trained noblewoman called Empress Celene.

Celene’s background is equal parts tragic and fortunate. Her parents were assassinated in “the Grand Game” when she was a child but she overcame her enemies by growing up fast and playing the “game” better than they did. Her wealth and station gave her access to training and alliances that she learned to exploit. It also gave her Briala; an elven handmaiden who became her lover and spy.

Briala makes for a conflicted confidante for Celene. On one hand, she protects the Empress and therefore the status quo that keeps her and her fellow elves in subjugation to the Orlesian Empire. On the other hand, she has given her elven kinfolk protections that they would not have under the rule of Grand Duke Gaspard.

Gaspard is a chevalier; an order of Orlesian Knights whose legendary training is only matched by their peculiar code of honor. Many of these chevaliers dislike Empress Celene’s peacemaking foreign policy and her elf friendly domestic one. Gaspard takes it as his duty to unseat her and “save” Orlais from her dishonorable pursuits of learning and goodwill.

It’s no surprise that a civil war develops. A class of backstabbing aristocrats who dress as if they are always attending a grand masquerade ball cannot run a nation. This civil war is not only between Empress Celene’s loyal subjects and Duke Gasbard’s rebels. The elves emerge as a force in their own right, thanks to Briala and a very interesting character called Felassan.

Felassan is an old elf mage who helps Briala but keeps his own agenda secret. His telling jests reveal an uncanny insight into the motives of others. His japes at Briala’s cross-purposes cause her to reevaluate her role in the Orlesian Civil War. Her love for Celene and her commitment to helping the elves both cause her disappointment and pain. Felassan uses his sarcasm to point out uncomfortable truths to her.

Felassan is the great secondary character of this book. He pulls the curtain back behind much of the Dragon Age world while covering up his own origins. I think the author did an excellent job ensuring that he is more than a sidekick. Many times in fantasy novels the characters engaged in the central struggle are more earnest than enlightening, but the characters in Dragon Age: The Masked Empire are more nuanced than that.

The ever-popular Dragon Age franchise has spawned games, DLC and four novels. This fourth one highlights a very complex relationship that struggles under complicated politics. It is a fantasy story with elves, magic and medieval warfare but with a modern look at love and politics. Dragon Age fans as well as fantasy fans in general should check it out.