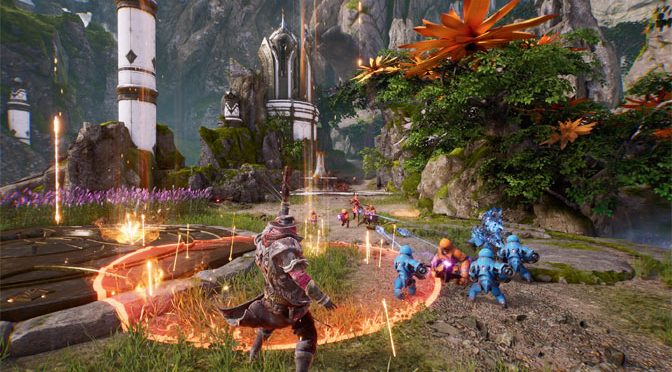 Netmarble announced the second closed beta test (CBT) for Overprime, its upcoming strategic action 3D TPS MOBA for Steam, is now available. While the second CBT will run until May 9 at 6AM ET/3 AM PT, everyone can be part of this test via the Steam platform.

Players from around the globe will have 11 days to battle it out on 7 server regions: Seoul, Frankfurt, Virginia, Singapore, San Paulo, Hong Kong, and Bahrain. The CBT will offer 25 Steam supported languages along with Arabian, Indonesian and Hindi.

Prior to the launch of Overprime’s second CBT, Netmarble has recruited a number of Partner Creators globally including Korea, Japan and the U.S to bolster the CBT experience and showcase the game with their viewers.

● Game Optimization – a wide range of game settings will allow more players to enjoy Overprime, such as the ability for graphic card users with lower specs to still play
● Advanced User Interface – several visual enhancements have been added including a new mini map, as well as in-game stores and items
● Improved Tutorial – a new guide has been added for new MOBA players to showcase Overprime’s unique game mechanics including Guardian and Dunk System
To celebrate the momentum, a number of events are drawing fans’ attention.
● Overprime Best Moment Event: Don’t let the memorable moments slip through during the CBT. Players who share the clip link of the special moments to Discord are eligible to a lucky draw to win exclusive Overprime souvenirs.
● Portrait Coupon Giveaway Event: For those players who accessed the CBT or reached a level of 7 will obtain Portrait Coupons, which can be utilized decorating in-game profile pictures. The coupon will be given at the momentum of Early Access.