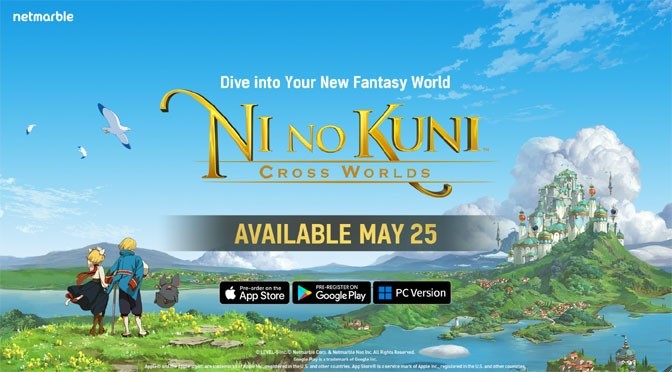 Netmarble, a leading developer and publisher of high-quality mobile games, has announced the launch date for the highly anticipated massively multiplayer online role-playing (MMORPG) anime game Ni no Kuni: Cross Worlds. The game will be available May 25 on mobile devices with cross-play on PC.

Set in the world of Ni no Kuni, originally created by Level-5 and the acclaimed Japanese animation powerhouse Studio Ghibli, Ni no Kuni: Cross Worlds brings a new story and cast of characters to a world already rich with magic and wonder.

Upon entering the game, players will choose one of five playable classes — the dashing Swordsman, the elegant Witch, the playful Rogue, the intelligent Engineer, and the unstoppable Destroyer. Each of these unique classes has a fully customizable appearance, allowing players to make each character truly their own.

As players explore the world of Ni no Kuni: Cross Worlds, they will be drawn into a compelling story that requires them to take swift action in order to save their new fantasy home. Players can look forward to all this and more:

• Immersive Anime World – marvel at the beauty and detail all around in an open world that feels like an animated film, rendered in the Unreal 4 Engine.

• Meet Familiars – mysterious creatures who join players to fight alongside them, providing special abilities to help succeed in battle. Collect up to three Familiars at the same time and grow stronger together.

• Create and Customize Your Own Farms – the place players go to relax, hang out, and visit all the Familiars they’ve collected. Players can decorate Farms with various accessories suited to their own unique preferences.

• Ride in Style – with a wide variety of mounts, available for players to acquire as they traverse the world. Giant cats, floating mechanical gliders, and grumpy birds are just some of the whimsical choices available!

• Make New Friends – by joining a Kingdom and working to rebuild the fallen Nameless Kingdom. Through cooperation, players can make their Kingdom stronger and even decorate it with their group’s unique style.