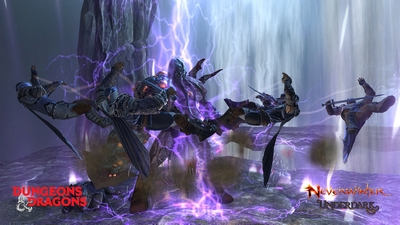 Today, Perfect World Entertainment Inc., a leading publisher of free-to-play MMORPGs, and Cryptic Studios announced Neverwinter: Underdark – the eighth expansion of the action MMORPG set in the Dungeons & Dragons’ Forgotten Realms universe from Wizards of the Coast – is coming to Xbox One on February 9, 2016. Engage in battle with demonic forces throughout the Sword Coast and fight alongside Drizzt Do’Urden, as he battles the dreaded Demogorgon in a 10-player encounter.

In Neverwinter: Underdark, players will descend into the Rage of Demons storyline from Wizards of the Coast including an epic, 10-player battle against the two-headed Prince of Demons, Demogorgon with classic Dungeons & Dragons characters including Drizzt Do’Urden, Regis and BruenorBattlehammer. This update for the free-to-play MMORPG includes all-new content such as the new hub zone of Mantol-Derith, two end-game skirmishesand “The Dwarven King,” a quest line written by New York Times Best-Selling Author, R.A. Salvatore, whose latest novel Archmage kicks off the Rage of Demons story.

Neverwinter is a free-to-play action MMORPG that features fast-paced combat and epic dungeons. Players explore the vast city of Neverwinter and its surrounding countryside, learning the vivid history of the iconic city in the Forgotten Realms and battling its many enemies. Neverwinter is currently available on PC and digitally for Xbox One, available free-to-play with Gold* from the Xbox Games Store.