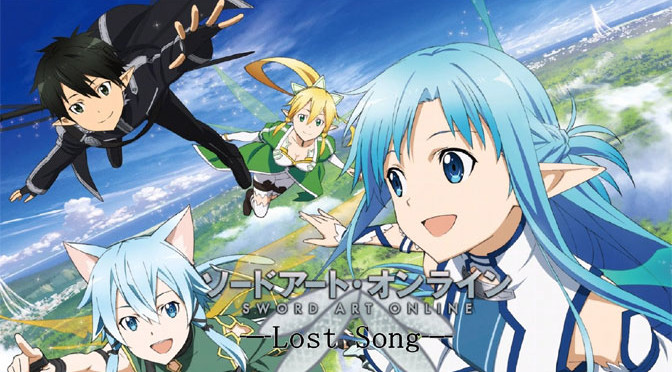 Hello everyone! I’m back with a game that was released a couple months ago, but I hadn’t had time to tackle until recently. It’s Sword Art Online: Lost Song!

Plot: The plot is a based off an alternate continuity where certain events that never happened in the canon of the Sword Art Online timeline occurred. These include the players of Sword Art Online actually clearing all 100 floors, instead of stopping at Floor 75, and having others be sucked into the game via unknown circumstances allowing for characters introduced in later arcs of the original storyline to become a part of Sword Art Online. This isn’t explained at all during the game which is highly frustrating as those of us who didn’t pre-order the game and didn’t get the prequel for free. There are references to events where I had no clue how they occurred and even after looking up the story, I’d still have preferred to get the information via the game.

In addition, the plot of this entry isn’t nearly as intriguing as any of the canon plot lines, although Fairy Dance (the Alfheim Online Arc) is pretty close to being as bad as this game. The story of Sword Art Online: Lost Song takes place in Alfheim Online, which allows for the big draw of this game: flight.

Gameplay: That all being said, the game wasn’t that bad to play. I actually enjoyed the hell out of the flight system that Sword Art Online: Lost Song boasted, which was great since it allowed for some intense boss fights. Unfortunately only a few boss fights allowed you to take advantage of that system and the rest forced you to fight in a square room where you had little vertical movement capabilities. This could be frustrating if you play mostly as melee and don’t level magic abilities, as when facing certain bosses it’s more efficient to use magic over weapons.

However, those same grounded fights were actually the most balanced as any where flight was allowed could end up just being a game of cat and mouse between you, your two NPC partners and the boss. If you can outrun the enemy it’d quickly devolve into a hit and run fight where you’d heal yourself and run away after dealing some damage. In addition the “World” bosses situated in the world maps that were grounded could easily be exploited to raise ranged abilities skill levels to ridiculous levels by floating out of their reach or standing on a nearby environmental piece where you can reach them, but they can’t reach you.

I found numerous exploits that allowed me to level character’s abilities in ways that were probably never intended. By the end of the storyline I had an attack for Kirito that let shave off two bars of health from a boss at least. It was incredibly overpowered and while it made me feel accomplished, it did cheapen the difficulty settings.

Regarding the rest of the gameplay, aside from combat it plays sort of like a Visual Novel in that you interact with various characters to accomplish “quests” that may or may not include combat sequences. In addition, most of the cast is female, and while I have no issues with that, in fact I enjoyed having so many characters I could raise to become badasses be female instead of male, it did feel like pandering to fans.  I guess what I’m getting at here in some shorter words is that the game has an incredibly narrow focus and doesn’t hope to expand beyond the fan base established by the Anime. Which is a real pity, because the setting of Sword Art Online could make for some really great games.

One last complaint I have regarding the gameplay is the inclusion of what has to be the worst Player Customization system in the last 15 years. The game allows for you to create three custom characters, but these only have two settings for hair, voice, and hair color. You can’t even choose genders for the various races, and to top it all off your character looks like every other NPC you see in the game. It was highly disappointing and I hope to god that I never see a character development system as poorly designed again.

Art: Other than playable characters, unique boss models, the visual novel style cutscenes and the premade CG cutscenes, the art for the game is very basic and is highly disappointing. The landscapes are bland and repetitive and I even saw many instances of textures improperly mapped which led to them being stretched at certain locations in the game. Enemy models are often just retextures of the same model and attack animations are highly lacking for even the playable characters.

Music: The music doesn’t fare much better than the art, with it being just as repetitive and boring. The only highlights are the songs sung by actual musicians from Japan as a shout out to the Anime.

Overall: If you love Sword Art Online, Lost Song might be for you. Otherwise please move on and find another game like Tales of Zestiria to play.

Not for those who don’t like: Sword Art Online, Repetition in Nearly Everything, Terrible Artwork and Music, Bland Plotlines.