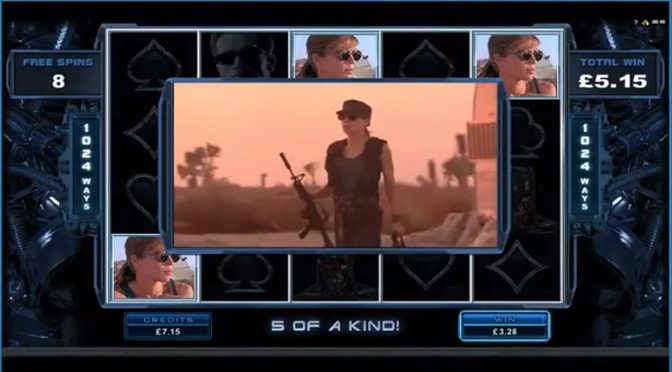 The month of March just started, but we already have many hot slot releases in 2021. Every provider released at least one amazing game from the start of the year, and you should check online slot reviews regularly to keep pace with them. And now, one of the biggest, oldest, most famous, and overall best slot game providers surprised us with one game that took its theme from a classic movie – Terminator 2!

This amazing slot pays well, but even more importantly, it revived one of the most iconic movies from the 90s, including some of the famous lines from main characters, soundtrack, and even incorporated some of the movie abilities of the characters into the game. We will tell you everything about it a bit later, first, we need to remind ourselves of a few things about this classic.

When Was the Last Time you Watched this Iconic Movie?

Terminator 2 is one of the movies almost nobody watched only once. Many TV stations broadcasted it numerous times in the last 30 years. We won’t lie to you — there was a time when the movie was considered almost a joke because special effects didn’t age well but after the time of making movies for the sake of the effects passed, people realized that Terminator 2 is a masterpiece.

A futuristic, utopian drama, where the villain from the first movie who was destroyed by Linda Hamilton’s character, returns as a protector of her son because more advanced and dangerous T-1000 came from the future to kill him. In the end, the T-1000 got melted in a high furnace, but Schwarzenegger’s character also had to die, because he couldn’t allow the possibility of his microchip ending in bad hands.

Many of the robotic powers showcased in the movie, such as X-ray vision and the morph ability of T-1000 were perfectly included in the slot game which completely blew our minds!

Terminator 2 is a 5-Reel Masterpiece!

At first glance, Terminator 2 looks like a classic slot, with its 5×3 design. But don’t get fooled, Terminator 2 slot is much more than that.

The first thing you notice is that all main characters from the movie are included. Of course, the original Terminator (Schwarzenegger character) has the most value, followed by John Conor, T-1000, Sarah Conor, and Terminator metal form.

Some would argue (including us!) that sexy Sarah Connor deserved more value in this slot, but we guess that she indeed had only a part-role compared to others.

First, it includes T-800 X-Ray vision, which allows you to get numerous cash rewards, based on the characters you had in the previous spin. Free Spins are valuable in this slot as well – if you trigger the feature, you will get ten free spins, and winning ways will expand to 1024 instead of the basic 243. Therefore, the biggest opportunity for you to win big will come during the free spins feature.

Technical Aspects of the Slot

This slot is actually a remaster of an older Microgaming slot, with polished graphics and modernized looks.

RTP of this game is 96.62% which is way above the industry average of 96%. The volatility of this slot is medium, but that doesn’t mean you won’t be able to hit big wins, because the maximum win is a 2952x bet, which is also a pretty high value.

But, we have to say once more, this slot didn’t pull our attention with the possibility of winning big. This slot mesmerized us with its amazing design and did an excellent job of reviving many iconic scenes from the movie.

After it loads, the famous Terminator 2 movie soundtrack will greet you, and music from the film will stay with you throughout the game.

When you hit a win, the main characters will become alive and you will see not only pictures, you will get animations and voices too. Basically, you get to rewatch some of the clips from the movie, but clipped in a way that completely makes sense and blends perfectly into the game.

Another cool ability used in this slot is the T-1000 metal morph. When you get a win out of three or more T-1000, those characters will morph into their liquid metal shape. After that, T-1000 will take the form of any other human (or robot!) character that is currently on reels, which will enhance the win.

Of course, the best moment in the game is when Sarah Conor comes to life. You won’t win much money by triggering wins with her, but it is always exciting to see the animation of one of the sexiest women of the 90s.

We would definitely recommend Terminator 2 remastered slot to everyone, especially to the fans of this franchise.

Although Terminator 2 was first aired 30 years ago, it still has a vivid fan base. The best thing about it is that people who were young in the 90s still love this movie, but over the years it gained more fans from younger generations, so there is certainly a huge pool of potential players for this slot, which Microgaming recognized instantly.

The major selling point of this slot is, of course, the game’s remastered graphics, animations, and sounds. No fan of Terminator 2 will be capable of resisting this piece.

Apart from many other attempts of remastering old, classic movies, this was widely successful, although we must say that Microgaming at least usually nails these.

If you want to relive your childhood memories, and at the same time try to win some money, Terminator 2 is definitely a slot for you.

Even after hundreds and thousands of spins we already have taken on this slot, nothing beats the feeling when you get three or more symbols with Linda Hamilton. That symbol should have been among the strongest ones, and then we would be able to have more reasons to hope that Linda will appear on our screens.