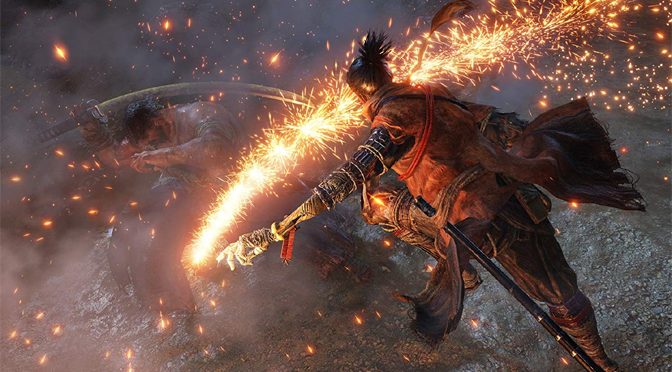 Gamers worldwide will embark on an unforgettable journey that makes death an enemy and ally in the highly-anticipated videogame, Sekiro: Shadows Die Twice. Directed by Hidetaka Miyazaki of FromSoftware (Dark Souls and Bloodborne), Sekiro: Shadows Die Twice launches today as an epic adventure that introduces players to a beautifully dark world filled with brutal enemies, intense sword combat, and engrossing vertical exploration! The game is now available on PlayStation 4; PlayStation 4 Pro; the family of Xbox One devices from Microsoft, including the Xbox One X; and PC via Steam.

Players will discover an all-new gaming experience in Sekiro: Shadows Die Twice as they take on the role of the “one-armed wolf.” As the game’s sole protagonist, the wolf is willed to obey and protect by using his newly acquired shinobi prosthetic arm to restore his honor, rescue his master known as The Divine Heir, and exact revenge on his enemy at all costs. Sekiro: Shadows Die Twice offers reward-based exploration as players uncover new items, meet new characters, encounter hidden challenges, and learn more about the rich lore within the game – all taking place across a detailed world filled with beautiful vistas, unique weaponry, and larger-than-life foes.

[amazon asin=B07DJWBYJN&text=Grab this amazing looking title on the platform of your choice from Amazon!]

“Sekiro: Shadows Die Twice is a game set in Japan’s Sengoku era and portrays the great battle faced by a lone, one-armed shinobi. Withered and ruined landscapes combined with a vibrant color palette make for a game world that is true to the FromSoftware style, in which the player is always one step away from death. It is our hope that new and old fans alike will enjoy our shinobi’s journey; rich with intense and dynamic combat,” said Hidetaka Miyazaki, President of FromSoftware and Director of Sekiro: Shadows Die Twice.

Published by Activision, a wholly owned subsidiary of Activision Blizzard, Inc. (NASDAQ: ATVI), Sekiro: Shadows Die Twice keeps true to FromSoftware’s legacy of challenging yet rewarding gameplay, and offers unique combat that emphasizes patience, technique and creativity. Players will learn to embrace the posture system, which focuses on deflecting attacks, while simultaneously being defensive and aggressive. Resurrection gives the opportunity for either tactical retreat or enemy deception to go on the counter-offensive. The shinobi prosthetic, which can be outfitted with a variety of attachments such as the grappling hook, loaded axe, and flame vent, brings an entirely new dimension to the gameplay as it enables players to exploit enemy weaknesses.

Sekiro: Shadows Die Twice is available for the suggested retail price of $59.99.