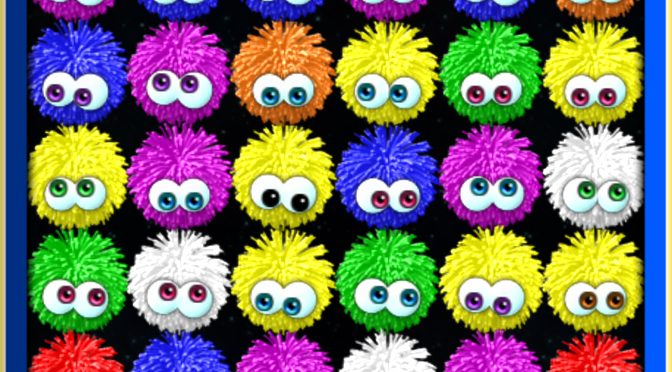 I know it seems crazy, but this is actually the fourth week in a row I’m reviewing a mobile game. Getting rid of social media on my smartphone was one of the best decisions I’ve ever made. I miss Reddit most of all, but it’s better playing games than just talking about it with random strangers online. At least for me it is. With that in mind, let’s go ahead and jump right into Chuzzle 2.

We’re no strangers to Chuzzle here at GiN. The little fellas were even featured in one of the early GiN Sunday comics back in… 2011! Dang, it’s been awhile. The first Chuzzle game for PC was one that I also spent a fair amount of time on back in high school.  It’s a casual tile-matching game that has players lining up three or more chuzzles to clear them from the board.

I say “clear” from the board, but what I really mean is popping them. Depending on the current level, players will pop chuzzles to achieve different goals. This includes the classic goal of filling a beaker with the essence of the popped chuzzles, but there are loads more as well. Among these are popping chuzzles to change the background gold, popping chuzzles to hatch eggs of varying colors, only popping chuzzles of a single color to rapture them (not joking), and more.

The large variety of different game types in Chuzzle 2 helps keep the game fresh. These modes all pop up during the normal mode of the game. This mode has the player defeating challenges to continue down a board and reach a goal. Doing so can earn them rewards and let them move on to the next level. The challenges will get more difficult as the player progresses, but players can choose to cash out and use their high score to earn coins. Even better is the fact that there’s no lives system to restrict play. So even if the player has to start over, they won’t have to wait to do so.

Coins are one of the rewards that players get for playing Chuzzle 2. Players are able to use these coins to decorate their chuzzle house. This includes buying toys, wallpapers and food for the chuzzles. It’s a bit like having a virtual pet, but there’s also not as much in the way of interaction. This is more for kids than anything, but it’s a welcome addition.

There are other rewards that players can also get in Chuzzle 2. This includes puzzle pieces. Players will use these to complete puzzles, which in turn offer other rewards. The two major ones I ran into were more chuzzles for my house and new modes.

That’s right. There are still more modes to unlock in Chuzzle 2. The two modes that players can unlock are Zen and Classic. These are two of the base modes that were available in the first Chuzzle game. I’m glad to see them return here as well. Sometimes, I just want to sit down for a more nostalgic Chuzzle experience, and this allows for that.

Being a mobile game, Chuzzle 2 does feature ads. Luckily, these ads are always skippable. They also don’t show up in the middle of a match, but wait until afterwards to hit the player. It’s strange how they show up too. Sometimes, I feel like I get an add after every challenge. Then other times it seems like I can go two or three matches without an ad. Either way, there is an option to buy an ad-free version of the game. Honestly, I’ll probably go this route sometime soon. Chuzzle is just one of those games I can see always staying on my phone and I’d rather not deal with ads if that’s the case.

The visuals in Chuzzle 2 are spot on. They look great on a smartphone and it really feels like a lot of care what put into making it work. Sure, tile-match games are all over mobile devices, but it’s the sleek user interface that helps this one stand out. Plus, there’s lots of animations and rainbow explosions during play. Small details, such as shaking puzzles to make them dizzy, are also still present from the first game.

The audio in Chuzzle 2 is another strong part of the game. It uses the same basic music style as the first game and probably even some of the same songs. They still hold up today, as do the sound effects. I’m not one for keeping my volume on while playing games, but this is one of those cases where I just do it anyway.

Overall, Chuzzle 2 is a great way to kill some time. The match-three formula works well on mobile and this game is a prime example of it at its best. It’s got all the style and strategy that a game of this genre needs and is something just about everyone can enjoy. This alone warrants spending some time with it.

31 thoughts on “Popping Back into Puzzles with Chuzzle 2”