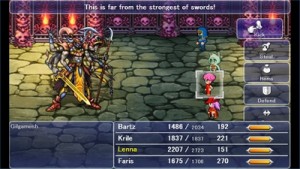 The Sealed Temple, an additional dungeon originally featured in the 2006 version of Final Fantasy V for Game Boy Advance, and Enuo, the optional boss created by renowned designer Tetsuya Nomura.

Square Enix also announced today that Final Fantasy V and Final Fantasy VI are now compatible with Amazon Fire TV. Players who have purchased the games via the Amazon Appstore will be able to download the update for free today.

Final Fantasy V weaves together a classic tale of magic, monsters and friendship. Players follow four unlikely heroes who embark on a journey to restore life to the world’s four elemental crystals. The latest Amazon version features cloud saving capabilities where players can transfer their save data from their tablet devices to TV and vice versa.

Regarded as one of gaming’s most highly-acclaimed story, Final Fantasy VI follows the epic story of Terra Branford, a powerful woman with a mysterious past, as she fights to regain her memories in a world ruled by magic, machines and the fearsome Gestahlian Empire.