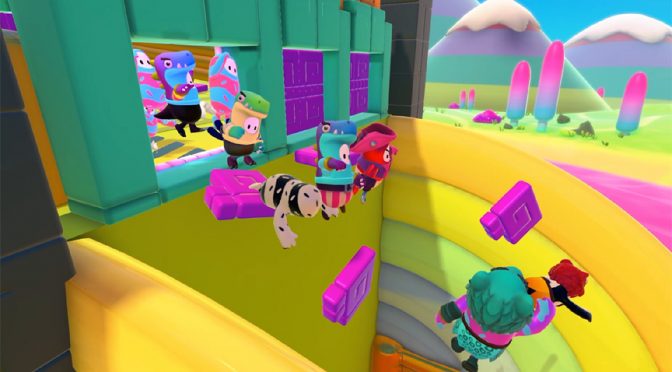 In the last few years, the Battle Royale game mode has become one of the most popular game modes in terms of both active players and in viewership on streaming platforms. The game mode was popularized with the release of Fortnite in 2017.

It entails gamers playing online against other real-life gamers all vying to be the last one standing at the end of a match. However, most of the different iterations of the game mode involve combat of some sort where opponents are needed to be killed off to be eliminated from the game.

This is what separates Fall Guys as it puts a totally wholesome twist on the Battle Royale game mode. Fall Guys is played with up to 60 online players all vying to finish an obstacle course where only a certain number qualify for each level of the course.

The obstacle course has been described by many as a combination of popular tv shows, Wipeout and Takeshi’s Castle. The graphics of the game is also designed to be suitable for most ages. Players are represented by little animated avatars that they can customize to their liking. This made the game appealing to even the most casual of gamers.

The game was developed by Mediatonic and is available to download for free on PlayStation Plus or for various prices (depending on region) on Steam.

Fall Guys Takes Over Steam, PS Plus and Twitch

Since its release in the first week of August, Fall Guys has sold over seven million units of the game in just a little over three weeks after its release according to data provided by Safebettingsites.com. Sony also announced that the game has set the record for most downloaded Playstation Plus game of all time.

The game’s appeal stretches beyond the gamer experience as it has also proven to be popular among those who merely enjoy watching the game being played. In August, Fall Guys was already making its way to the top of the charts despite being in its infancy on streaming platform Twitch.