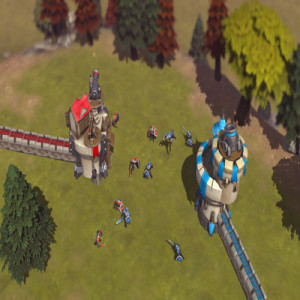 Independent games developer and publisher Blowfish Studios is proud to announce that Siegecraft Commander has been approved by Microsoft for ID@Xbox, and is on display at Microsoft’s Booth #4100 and OFMR #4000 in the West Hall. Currently in development and scheduled for release in Q4 of 2014, the game offers intuitive turn-based tactical gameplay with the intensity and richness of real-time strategy.

Siegecraft Commander is the latest installment in the popular ongoing Siegecraft universe. With a combination of twitch skill and positional tactics, the objective of the game is to build a fortress in a branching structure of specialised towers interconnected with indestructible walls. Almost everything, including the construction of buildings, is performed by adjusting the angle and trajectory of projectiles. Fans of cult classic Moonbase Commander will appreciate the fresh take and overall improvements, while introductory players will discover a colourful and uniquely accessible approach to strategy.

In the games Single-Player Campaign, players can learn the ropes and partake in a Human- or Lizard-race storyline. Each sheds light on the world’s history of endless conflict and is designed to explore the full potential of the game’s flinging mechanics and construction trees with a mix of puzzle levels and challenging battles in a beautiful medieval fantasy setting. The games multiplayer mode offers not only matches against other worldwide players and optionally AI opponents, but also offers a host of configurable settings such as maps, objectives, and optional rules such as teams or unit restrictions. Multiple Online Multiplayer modes exist as well, featuring simultaneous turn-based play, turn-based asynchronous play, salvo-based asynchronous play, and for those who seek pure action and chaos: simultaneous real-time mode in which all players can attack as fast as they can fling. Most modes can also be played in Local Hotseat Multiplayer, satisfying as many local players as each map will allow on the same Xbox One console.

The process of building a base, locating resources and dispatching units, along with fierce positional tactics and earthshaking cascades of destruction lend the game a feeling not unlike most RTS titles. Uncommonly however among most comparable strategy games, Siegecraft Commander is ideal for console play, being carefully crafted and specifically designed for the Xbox One controller.