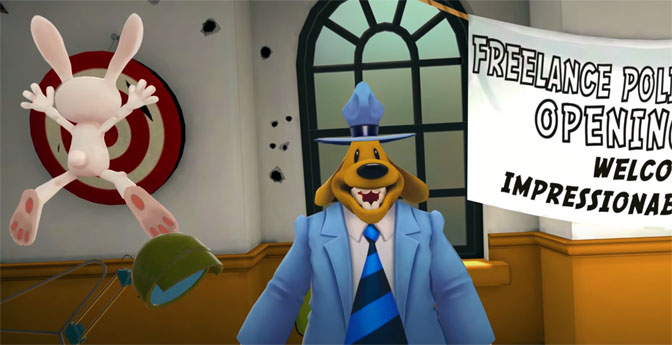 Following its release in July for Oculus Quest, and inclusion in this month’s Venice International Film Festival’s “Venice VR Expanded” showcase, fans will be able to download the game on Steam and the Viveport App store for $29.99 USD.

Sam & Max: This Time It’s Virtual! is an over-the-top action-adventure VR title featuring Steve Purcell’s irrepressible dog with a hat and hyperkinetic rabbity-thing. It’s the duo’s first game in more than a decade and the pair’s first foray into Virtual Reality.

This time our dynamic duo is using the incomprehensible magic of virtual reality to invite the player into their off-kilter world for a furious day of monster-slaying, obstacle courses, responsibly discharged firearms, and, of course, saving the entire freaking world. Sam & Max: This Time It’s Virtual! mixes puzzles and escape rooms with challenges of skill and classic point-and-click adventure sure to put even the heartiest Freelance Police cadet through their paces.

Brought to life by an all-star team of Sam & Max veterans, Sam & Max: This Time It’s Virtual! features all of the quips and crime-fighting adventure mixed with immersive action only possible with VR.