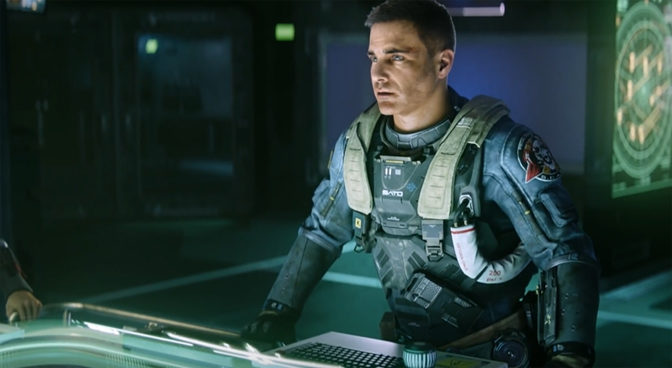 One of the most-anticipated releases of the year is here, as Call of Duty: Infinite Warfare is available now digitally and at global retailers worldwide. The new title from the #1 top-selling console franchise in North America for seven consecutive years, delivers a bold, new direction by exploring the weight of leadership in an emotional, character-driven narrative. In a first for the franchise, Infinite Warfare introduces an all-new story happening throughout our solar system, delivering gameplay innovations, such as space dog-fighting and zero-g combat, as well as seamless transitions from experience-to-experience keeping players constantly immersed in the action. Call of Duty: Infinite Warfare is published by Activision Publishing, Inc., a wholly owned subsidiary of Activision Blizzard, Inc., and developed by Activision’s Infinity Ward. 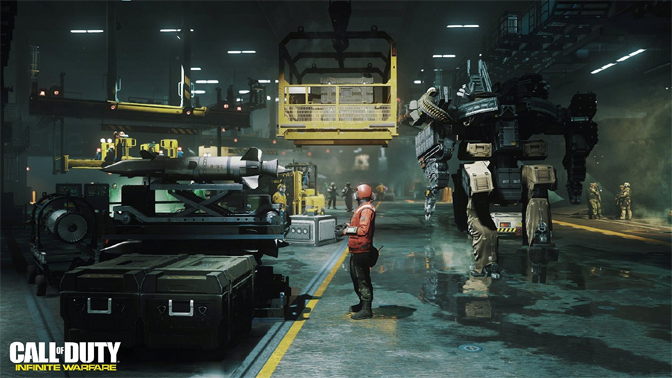 In another first for Call of Duty, Infinite Warfare also features the greatest bonus content in franchise history through the Legacy and Digital Deluxe Editions, which include Call of Duty: Modern Warfare Remastered. A celebration of one of the most critically-acclaimed games in history, Call of Duty 4: Modern Warfare, the new remastered version has been completely enhanced for a new generation.

[amazon asin=B01EZA0CEE&text=Defend Earth! Enlist today with a copy of Infinite Warfare from Amazon]

“Infinite Warfare is hands-down the best story campaign we’ve had in years and is a leap forward in the fluid, fast-paced action that Call of Duty fans know and love,” said Eric Hirshberg, CEO of Activision. “It’s a future war but an old school fight. And with a great multiplayer and an over-the-top zombies mode as well, we can’t wait for our fans to start playing. The only question, is which mode are you going to play first?”

Packed with an incredible amount of content and variety, Call of Duty continues to deliver something for all players across three unique modes of play in Infinite Warfare: an epic single-player story campaign that puts narrative front and center as players are taken on a classic journey with unforgettable characters; an all-new, 4-player cooperative zombies mode called ‘Zombies in Spaceland’ that takes players on a wild ride into a 1980’s amusement park; and a deep and rewarding multiplayer mode with robust customization options to suit different play styles, including an all-new weapons crafting system, full eSports integration and much more.

“This is a special year for us and for the Call of Duty community,” said Dave Stohl, Studio Head of Infinity Ward. “We began three years ago with the goal to push ourselves in an all-new direction and take players to places they’ve never been before. In Infinite Warfare, we’re telling a classic war story of good vs. evil, and adding an epic backdrop that lets us introduce a ton of innovative gameplay. Our cooperative mode goes in a completely different direction that combines 1980s inspiration with a crazy, new zombie apocalypse. And, our online multiplayer takes everything that makes Call of Duty multiplayer so engaging, adds exciting Combat Rigs with their unique payloads and traits, introduces the challenge of Mission Teams, as well as the chase of prototype weapons, and then delivers a whole new level of gameplay customization that gives gamers all the tools to fit their unique playstyle.”

For the first time in franchise history, the Call of Duty: Infinite Warfare story campaign unfolds seamlessly, creating one continuous and immersive experience, with more player agency and autonomy than ever before. In the campaign, fans play as Captain Reyes, a Tier 1 Special Operations soldier who takes the helm of the Retribution, one of Earth’s last remaining warships. Facing a ruthless insurgency led by Admiral Salen Kotch, portrayed by Kit Harington (Game of Thrones), and including the likes of MMA superstar Conor McGregor as Captain Bradley Fillion, Reyes must defend his home against this relentless enemy force. Along with the military, grounded combat that is hallmark to the series, the game allows players to pilot their own advanced jet fighter vehicle, known as the Jackal, in free-flying aerial battles both on Earth and in space.

“We couldn’t be more thrilled to work with the talented teams at Activision and Infinity Ward to ensure PlayStation continues to be the best place to play Call of Duty. We saw an incredible response to Infinite Warfare’s multiplayer beta last month, not to mention our 30-day early campaign access for Modern Warfare Remastered,” said Phil Rosenberg, SVP of Global Partner Development and Relations, Sony Interactive Entertainment America. “Today is the day PlayStation fans have been eagerly waiting for: Infinite Warfare, the return of a classic with Modern Warfare Remastered and the all-new PlayStation VR experience with Jackal Assault.”

Call of Duty: Infinite Warfare multiplayer allows gamers to customize their play like never before, giving players more ways to optimize their weapons and gear to their style of play. Infinite Warfare introduces the most advanced tools of war: combat rigs, high-tech equipment, and unique prototype weapons. It’s an incredibly deep experience where everything – including weapons, gear, lethals and tacticals – has been built around different types of play styles, and where fans have the power to combine them however they want. The mode features unparalleled customization, combined with the fluid, momentum-based movement system of Call of Duty: Black Ops III evolved to custom-fit the new combat, to create a frenetic gameplay experience where every second counts.

The multiplayer mode also introduces more ways than ever to earn rewards and upgrade weapons. For the first time in Call of Duty, the game features an all-new crafting system that allows fans to use Salvage, an in-game currency earned during play, to create Prototype weapons that come with special cosmetic and functional benefits called “Gun Perks.” Additionally, players can level up and acquire specific weapons through Mission Teams. Fans can join four distinct Mission Teams, each with its own personality, challenges and team commander, to earn exclusive rewards unique to that team. 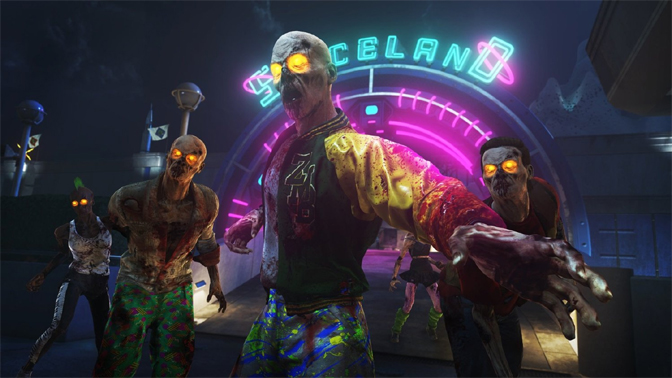 In addition, Call of Duty: Infinite Warfare debuts an all-new cooperative mode called ‘Zombies in Spaceland.’ The mode transports players into an original, action-packed storyline where they’ll fight as one of four classic ‘80s archetypes to battle the living dead in a space-themed amusement park full of deadly zombies, fun attractions and much more. The mode can be played solo or with up to three other players, and is easy for new fans to jump in right away.

Zombies in Spaceland features an all-star cast, starting with the evil villain of the story named Willard Wyler. Wyler is portrayed with voice and likeness by Paul Reubens (Pee-wee’s Big Holiday, Gotham). Unbeknownst to the actors auditioning for Wyler, they will be transformed into characters on screen and sent straight into Wyler’s film. The playable characters are voiced by Seth Green (Robot Chicken, Austin Powers) as “the nerd;” Ike Barinholtz (Neighbors, Suicide Squad) as “the jock;” Jay Pharoah (Saturday Night Live, Ride Along) as “the rapper;” and Sasheer Zamata (Saturday Night Live, Inside Amy Schumer) as “the valley girl.” Players will also encounter an enigmatic DJ in the theme park, portrayed with voice and likeness by David Hasselhoff (Knight Rider, Baywatch), who will be an invaluable resource as they try to get out of this horror movie alive.

Also available is the Call of Duty: Infinite Warfare Season Pass, which can be purchased on its own or obtained as part of the Legacy Pro and Digital Deluxe editions of the game. Season Pass gives discounted access to four Call of Duty: Infinite Warfare DLC Map Packs released during 2017 (discount based on a Season Pass suggested retail price of $49.99, and four individual DLC Map Packs at a suggested retail price of $15 each) that take innovative multiplayer mechanics to a variety of all-new, sensational environments. The DLC Map Packs will be available first on the PlayStation®4 computer entertainment system, and availability and release dates may vary by platform. Season Pass owners will also get four new terrifying zombie adventures featuring quirky environments and fearsome enemies. Additionally, as a special offer, Season Pass owners will receive 10 Rare Supply Drops and 1,000 bonus Salvage that fans can use to craft new Prototype weapons in multiplayer.

Additionally, available today to PlayStationVR fans, at no cost, is the all-new Call of Duty PlayStationVR experience “Jackal Assault,” which immerses fans in the cockpit and puts them in control of a Jackal, the personal fighter jet in Call of Duty: Infinite Warfare. 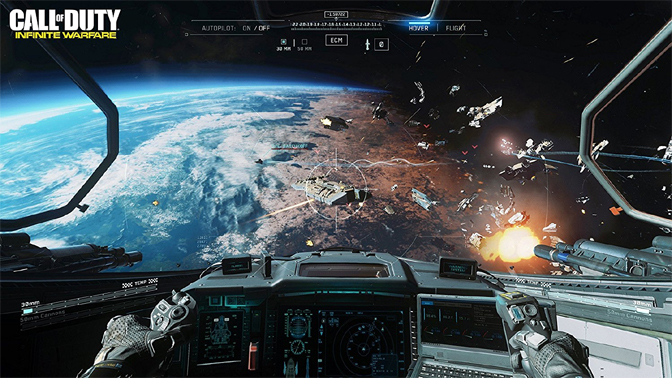 Today’s release of Call of Duty: Infinite Warfare also marks the kick-off of a new season of the Call of Duty: World League, with the first competition taking place at MLG Las Vegas December 16-18. Teams from all over the United States will compete for their chance to take home the first event title of the new CWL season and the winner’s share of the $100,000 prize pool. The competition will be shown around the world via in-game on the Live Event Viewer (Infinite Warfare PS4) and MLG.TV, www.twitch.tv/callofduty and www.youtube.com/callofduty, as well as other distribution channels which will be announced soon.

In celebration of launch, top esports team OpTic Gaming has partnered with the Call of Duty Endowment for the “Race to Prestige,” an around-the-clock relay video game marathon to raise funds for placing veterans into high-quality jobs. Sponsored by Best Buy, the event that began yesterday and is streaming live at www.twitch.tv/callofduty will continue through November 7, 8:00am CDT. Best Buy is offering 500 Gamers Club Unlocked memberships to all viewers who donate $25 or more, and Activision Blizzard has pledged to match up to $500,000 in donations.