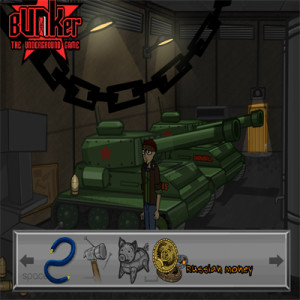 2tainment, Nightly studios and  Otto are proud to announce the release date of Bunker – The Underground Game. The Indie Point & Click adventure will be released for PC on the 21st of May and will be available for $ 14.99 on Steam. Follow the story to unravel as Otto Thompson ventures deeper and deeper into the mysterious Bunker in this hilarious point and click adventure puzzle spectacle!

Check out Bunker – The Underground Game on Steam

The official soundtrack was composed by the young and talented Satoko “Holly” Young. She is a very passionate music composer who delivered a beautiful vision of how Bunker feels and sounds right now.

The original soundtrack for Bunker – The Underground Game, composed by Satoko “Holly” Young of Skittlegirl Sound, is available for purchase at BandCamp.